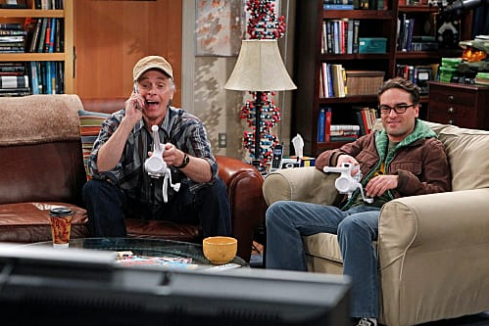 Penny’s dad is back! TVLine reports Keith Carradine will return for the 12th and final season of CBS’ The Big Bang Theory.

It’s unclear when Carradine will appear on season 12 of The Big Bang Theory, but the final season premieres on CBS on September 24th at 8 p.m. ET/PT.

What do you think? Are you a fan of The Big Bang Theory? How do you want the series to end?

It saddened me to hear that my favorite show forever is ending! It is in the same category as I love Lucy, Friends, and it will be in syndication forever! But I was looking forward to their adulthood, and growth, to relate, as I’m in getting up in age and still need to laugh, and forget every day issues for that half hour!!!! Perhaps the cast needs to speak with friends cast, because they could have gone on for 5 more seasons but didn’t and surely wish they would have! None of them have had that same success or chemistry,… Read more »

I love The Big Bang Theory, I wish it wasn’t ending. There is just too many unanswered questions. It is currently my favorite show.

I’m totally bummed that this show is ending!

I LOVED THE BIG BANG SERIES AND YOUNG SHELTON AND I WILL MISS BBT. I AM GETTING TIRED OF THE SHIFTING AROUND OF THE SITCOMS HOWEVER IT MAY BE THE LOCAL NETWORK HERE… SIMCOMS ARE A RELIEF AFTER ALL THE SAD AND NEGATIVE NEWS WE RECEIVE ANYMORE, SO KEEP THEM UP.. WE LOVE THEM

you know the button on your keyboard that says caps lock, right? just press it once to turn it off. you’re welcome.

I just can’t believe it’s actually ending. All I can say is NO please don’t! We love this show. I agree with Sharon, Too many sad and gory shows on. Doesn’t anybody like GOOD comedy anymore??? Because THE BIG BANG THEORY is good comedy, and I desperately wish Jim Parsons ( Sheldon) would change his mind. There’s too many stories that need following up, with proper endings. It’s going to be like losing family on thursday nights!
We are really SAD it’s ending. Still cannot believe it. 🙁