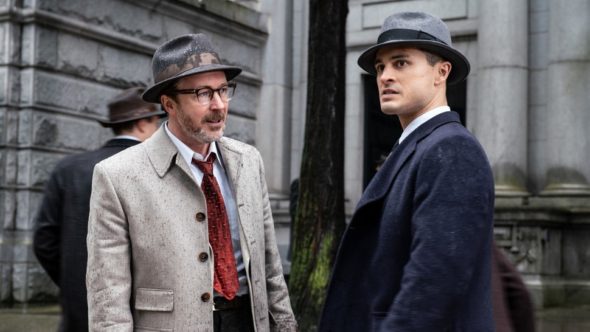 Is this show still out of this world? Has the Project Blue Book TV show been cancelled or renewed for a third season on History? The television vulture is watching all the latest cancellation and renewal news, so this page is the place to track the status of Project Blue Book, season three. Bookmark it, or subscribe for the latest updates. Remember, the television vulture is watching your shows. Are you?

Airing on the History cable channel, the Project Blue Book TV series stars Aidan Gillen, Michael Malarkey, Neal McDonough, Michael Harney, Laura Mennell, and Ksenia Solo. The show is inspired by the personal experiences of Dr. J. Allen Hynek (Gillen), a brilliant college professor. He was recruited by the U.S. Air Force to spearhead the Project Blue Book clandestine operation. He’s partnered with Air Force Captain Michael Quinn (Michael Malarkey). In season two, they quest for the truth and delve deeper into themes of global conspiracy, look at how UFOs have impacted the evolution of the nation’s military practices and technology and lean into the nostalgia of the 1950s.

The second season of Project Blue Book averaged a 0.21 rating in the 18-49 demographic and 1.30 million viewers. Compared to season one, that’s down by 32% in the demo and down by 22% in viewership. Find out how Project Blue Book stacks up against other History TV shows.

Will History cancel or renew Project Blue Book for season three? The channel has very few original scripted series so it’s hard to know how good the ratings have to be to earn a renewal. Last year, it was History’s highest-rated scripted series and, though the numbers are down, it’s still doing well. I think it will be renewed. I’ll update this page with breaking developments. Subscribe for free alerts on Project Blue Book cancellation or renewal news.

5/8/20 update: Project Blue Book has been cancelled on History.

What do you think? Were you hoping that the Project Blue Book TV show would be renewed for a third season? Are you sorry that History cancelled this TV series, instead?

Finally a show that caught my interest and imagination as well as history. I have missed it and hope that the History channel will decide to continue with more of the series.

This is an excellent show; please bring it back!

Since more news about ufo’s are appearing and the government is declassifying info about ufo’s, season three of Project Blue Book needs to be filmed. We were left with a cliffhanger as it was. Please bring the show back. Thank you!

Project Blue Book was great! It was right up there with X-Files. Can’t believe it’s cancelled!

I actually really like this series a lot. Why was it canceled this is totally stupid thank you

Because is based on true facts !

I have to agree here with Lee, and it seems the majority, why do some of the best tv shows get axed so early.

All the mind numbing drival there is on at prime time, the likes of big brothers. Most reality shows, it does seem we have been dumbed down by this rubbish.

I really enjoyed this show. It brought back memories of the X-Files. I just don’t understand why such good programs get canceled and these sorry ass reality shows keep returning over and over. Has our society become bunch of mindless zombies?

I really liked the show! Sorry too hear it won’t be coming on, the acting was good, great stories! Just don’t understand it.

Great show just like Kevin can wait I don’t understand how great shows get cancelled like this you just start really getting into it and they get canceled you know I really don’t mind being programmed into shows like these guess they got to move over for those great shows like the bachelor or the bachelorette lol!! Make me ffff sick bring back a 3rd season of project blue book you exutiv Guinness!!!

I am sooooo disappointed! Whyyyyyyyyyy. Loved the show & watched over on Demand. Why do all the good shows get cancelled?

Sad to see another enjoyable series get cancelled while they keep renewing certain repetitive runon shows.

Please bring it back ! There are few shows worth watching. I enjoyed this show and looked forward to it !!