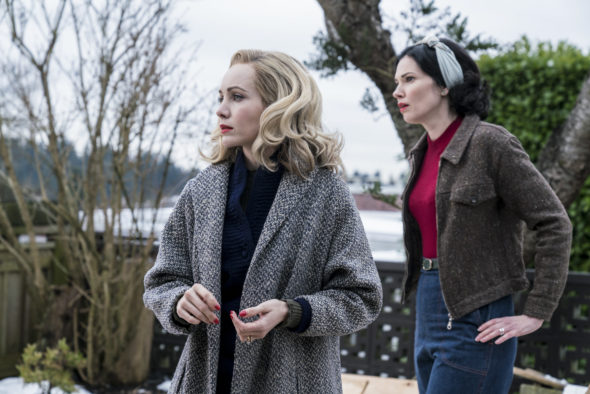 Does the first season of the Project Blue Book TV show on History get to the truth? As we all know, the Nielsen ratings typically play a big role in determining whether a TV show like Project Blue Book is cancelled or renewed for season two. Unfortunately, most of us do not live in Nielsen households. Because many viewers feel frustration when their viewing habits and opinions aren’t considered, we’d like to offer you the chance to rate all of the Project Blue Book season one episodes here. *Status update below.

What do you think? Which season one episodes of the Project Blue Book TV series do you rate as wonderful, terrible, or somewhere between? Should History cancel or renew Project Blue Book for a second season? Don’t forget to vote, and share your thoughts, below.

Don’t cancel this show. It has great potential.There are alot of people who is very interested in Project Blue book. Keep it in a good time slot and the audience will grow. Don’t make us guess if the show will be on a certain night.I like the curse of Oak Island but it has no real value to what is being kept from us for such a long time.KEEP THE SHOW!

I think the program is great, but also dose not follow the over all reported cases. Project Bluebook dives into the story, but to get the whole story facts you have to dig into the story and do some reading research to get what they left out of the TV program. Over all though, it is a well produced program, and wish for many seasons of renewals .

It’s a fun UFO Show, that’s it! As far as the truth? No! Notice how it says at the start, “Based On True Events”? I would say, it’s very loosely based! If you’re looking for the facts or “The Truth”? This’ the wrong show to watch! If you want to have fun & watch great acting? Then, have fun & enjoy “Project Blue Book”! The truth is out there? Just not here!

One of the worst shows I have ever seen! Depiction of military customs is atrocious—they wear their hats indoors, which is never done, and they don’t even know how to salute correctly! My husband car-pooled with Ed Ruppelt after he left the Air Force, and worked at Northrup Aircraft, and I know more about Project Blue Book than any of these so called experts or advisors! Ed and his wife Liz and two daughters lived two doors down from us on Josie Avenue in Long Beach. Check it out!
THIS SHOW SHOULD BE CANCELED!

Well, I thought that the over all look of the show is interesting. I do however think that it is over acted to a point in the case of the Air Force characters. Trying a little too hard there. What did irk me was… How is it a distinguished Astronomer sets up a Newtonian Telescope and everybody looks through it upside down or backwards. The mirror pointing at the sky while his son views through the eyepiece with the telescope pointing at him? Kind of like pointing a revolver at yourself in your hands and pulling the trigger. Surely somebody… Read more »

Love the first 2 episodes. The details on sets are excellent and the actors are top shelf. This series satisfies my X-Files lover in me. Really hope there’s a season 2!