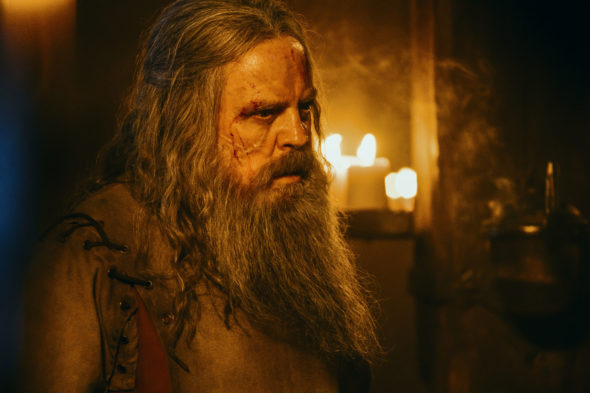 Is this the end for the Knights Templar? Has the Knightfall TV show been cancelled or renewed for a third season on History? The television vulture is watching all the latest cancellation and renewal news, so this page is the place to track the status of Knightfall, season three. Bookmark it, or subscribe for the latest updates. Remember, the television vulture is watching your shows. Are you?

The second season of Knightfall averaged a 0.13 rating in the 18-49 demographic and 652,000 viewers. Compared to season one, that’s down by 48% and 47%, respectively. Find out how Knightfall stacks up against other History TV shows.

Will Knightfall be cancelled or renewed for season three on History? The ratings are way down but this channel has so few scripted series, it’s difficult to tell what numbers they consider to be high enough for a renewal. It’s their lowest-rated scripted series so I’m inclined to think it’s toast. I’ll update this page with new developments. Subscribe for free alerts on any Knightfall cancellation and renewal news.

5/8/20 update: Knightfall has been cancelled by History.

What do you think? Are you sad that Knightfall has been cancelled? Were you hoping this series would be renewed for a third season?

Very disappointed! Finally, a worthy medieval show worth watching, with some fantastic characters, that didn’t focus on sex and “not offending specific groups”! Very unfortunate it is getting canceled so early on.

Disappointed this has been canceled. I found it later in the series and enjoyed watching so many in a row. It was actually better than most shows on today!