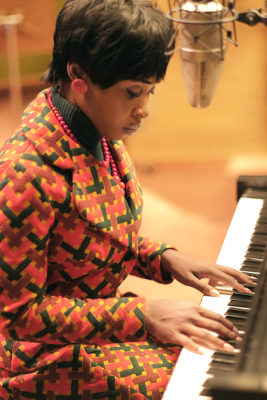 The story of Aretha Franklin is coming to the small screen this spring. National Geographic just announced season three of Genius will premiere in May.

The new season of the anthology drama “will chart how gospel prodigy Little Re became the iconic Aretha Franklin, the indisputable Queen of Soul.” The cast includes Cynthia Erivo and Courtney B. Vance.

Season three of Genius will air on National Geographic Channel across four nights, beginning May 25th at 9 p.m. ET/PT. Read more info below:

“Don’t say Aretha is making a comeback, because I’ve never been away!” – Aretha Franklin

PASADENA, Calif. & WASHINGTON — She was a gospel sensation, outspoken civil rights champion and one of the most gifted singers of her generation. She’s had more than 75 million records sold globally, attained over 112 Billboard hit singles, earned 18 Grammy Awards, performed at three presidential inaugurations and was the first woman to be inducted into the Rock & Roll Hall of Fame. GENIUS: ARETHA will chart how gospel prodigy Little Re became the iconic Aretha Franklin, the indisputable Queen of Soul.

GENIUS dramatizes the fascinating stories of the world’s most brilliant innovators, exploring their extraordinary achievements along with their volatile, passionate and complex personal relationships. The third season of National Geographic’s critically acclaimed global anthology series will premiere over four consecutive nights, beginning Memorial Day, Monday, May 25, at 9/8c. This upcoming season will be the first-ever, definitive and only authorized scripted limited series on the life of Aretha Franklin.

The eight-part series will explore Franklin’s musical genius and incomparable career, and the immeasurable impact and lasting influence she has had on music and culture around the world. GENIUS: ARETHA will alternate between present-day storylines and scenes from her youth, focusing on her childhood and the pivotal events that influenced her career as an adult.

Franklin’s legacy is brought to life by 2020 Academy Award nominee Cynthia Erivo (“Harriet,” “The Color Purple”), whose incomparable depth as an actor and musician shines light on the woman behind the music, and the genius of Aretha. Joining her is Shaian Jordan as Young Aretha (Little Re), the shy, immensely talented daughter of celebrated Detroit preacher Clarence LaVaughn (C.L.) Franklin, played by Courtney B. Vance (“The People v. O.J. Simpson: American Crime Story”), who thrusts Aretha into the spotlight at a very young age. C.L., a star in his own right, was known as the “Million Dollar Voice” and had his legendary sermons published and aired on a weekly radio show, and also booked national ministry tours and public appearances.

Pauletta Washington (“She’s Gotta Have It”) plays Grandmother Rachel, the matriarch of the Franklin family after C.L.’s wife’s death. She dotes on her son C.L. and raises his children as her own. Patrice Covington (Broadway’s “The Color Purple”) and Rebecca Naomi Jones (“The Big Sick”) portray Erma and Carolyn Franklin, respectively, Aretha’s sisters – both talented performers who sing backup for Aretha later in life. Steven Norfleet (“Watchmen”) plays Cecil, Aretha’s brother, who is protective over her and her romantic relationships. Omar J. Dorsey (“Queen Sugar”) joins as James Cleveland, a choir director who joins C.L. Franklin’s church and eventually befriends and coaches Little Re.

Malcolm Barrett (“Timeless,” “Preacher”) joins as Ted White, Franklin’s first husband and business manager, who develops relationships with songwriters and producers and picks some of her biggest hits.

David Cross (“Goliath,” “Arrested Development”) is Jerry Wexler, the legendary record producer who first spots Franklin’s incredible talent and potential. As her success grows it causes a conflict of interest as their creative relationship changes and their professional stakes increase. King Curtis, played by Marque Richardson (“Dear White People”), is a horn player who joins the Muscle Shoals musicians during Franklin’s first recording session with Cross as producer. Kimberly Hébert Gregory (“Vice Principals”) plays Ruth Bowen, a pioneer in her field and the head of a successful black-owned agency, who represents Franklin, booking her at world-class venues and getting her onto the covers of Time and Ebony magazines.

What do you think? Have you seen Genius? Will you watch the new season?