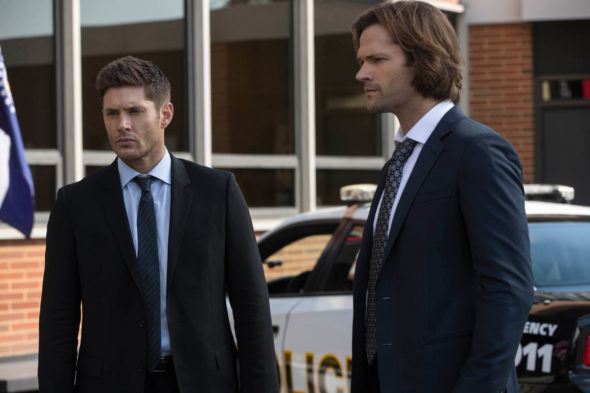 What can fans expect from the final season of Supernatural? The cast and creators of the CW TV show recently teased the series’ 15th and last season, Deadline reports.

During this year’s San Diego Comic-Con, Supernatural executive producer Brad Buckner revealed the final season will explore Dean and Sam’s changing beliefs about God. Fellow EP Eugenie Ross-Leming said the last season “has many tentacles and you’ll see them played out throughout the season.”

Additionally, TVLine reports Jake Abel will return to the The CW series as Dean and Sam’s half-brother Adam.

The 15th and final season of Supernatural premieres on October 10th at 8 p.m. ET/PT.

What do you think? Do you watch Supernatural? How do you want the series to end?

so season is only 13 episodes ??? ends with jack cryying? saying sorry to the boys we been watching this since 2005 15 years and that was the ending there has to be more episodes coming for this season right lmk

I just want to say I have enjoyed supernatural for many years now and it brings me to tears to see it end . I want to thank all of you because I could’ve had a bad day turn on supernatural and I would feel positive not sure how or why but that’s what the show did . The guys did so much outside work as well . A great group of folks . I am 63 years old and I’m not a tv person , however this show I have watched over and over thank you for supernatural ,… Read more »

Theres so much I could type right now to describe what this show has done for me since day 1. It has saved me from depression, and suicidal thoughts and more. I cant even put into words. but i will be forever grateful to have had the pleasure of this cast past and present. The laughs, the tears. I will forever treasure and i will continue to binge as I’ve always have. When it doubt supernatural it is. ❤

I used to work day and night and had never heard of Supernatural. Then I suddenly became very ill, and spent years in hospitals and nursing homes. That’s when Sam, Dean and Castiel came into my life. They dragged me out of my pity party, and gave me a reason to wake up in the morning. Problem was that I didn’t really know what was going on at first. Then, an aide, who was a fan, gave me the lowdown. I’ve been hooked ever since. I dread the end coming. I will have a big hole in my heart when… Read more »

I adore this show. Im very sad to see it go. Of course i like to see a happy ending where they all wind up together. Yes Bobby and Cass included. Society never likes an ending other than. Maybe settle for heaven together or where they start over in another quantum universe? And, all the same episodes happen all over. But, if its an ending i dont agree with, I will not complain like the,”Game of Thrones” viewers. It was only a show and I’m more greatful for all the years and their acceptance of us, the fans, as an… Read more »

Jarad and Jensen brought the Winchester brothers to life and kept them that way to the the end. Hope the see the boys, Cas and Bobby Singer drive off in the Impala in the sunset/sunrise. They came across as family on the convention interviews. Unless I missed it, there was never any bad publicity on anyone involved in the program. I’m the same age as their Mother, born in 1954. Sam and Dean were my surrogate sons. I have watched Supernatural since the first day, will continue to watch until the very end. I bought the box sets until I… Read more »

So am I 1955 and I love this show I was home from work turned the tv to tnt in 2009 I believe and fell in love I was lucky and land 10 minutes into season 1 episode 1 . I was thrilled to death to see 3 more episodes were on. I believe the fans can sense the positive feeling the actors present to us kinda like work you can feel tension in the air anyhow to me if it were any other characters the show would not be the same Thank you for sharing your time away from… Read more »

I have seen every show they made and it is so sad to know it will soon end forever ? I understand they are tired of making all those shows but I never once got tired of watching them even when the made one of memories that was kinda boring but I watched it anyway ! I wish all that made up SUPERNATURAL the best for the rest of their lives !!!!!!!! YOU WILL BE MISSED AND THANKS FOR MAKING AT LEAST ONE HOUR A WEEK AWESOME !!!!!!!!!!!

My family & I have been loyal viewers throughout the entire series. We feel so close to the characters that we were extremely upset that the last half of the last season was so inferior comparatively we almost turned it off. The writers seem to have forgotten past storylines and the memories of the characters. There was so much stupidity shown that it was mindboggling. I’m hoping that the new and final season will go back to the caliber of the past…..PLEASE!

I know the actors would like to move on to other characters, but I really wish they weren’t ending the show! Supernatural is one of my all time favorites!!! I even got my sister watching it and now she has every season on dvd, except for the upcoming 15th season! I love Dean and Sam Winchester, the story lines and all the special effects! There will never be another show like Supernatural!!! ❤❤

I would like to see Sam and Dean living normal lives. With wives snd children. Dean could marry Anael and Sam could marry Ruby. Angel and demon wives turned human. Why not?

I never wanted this show to end.they are like family and will be greatly missed