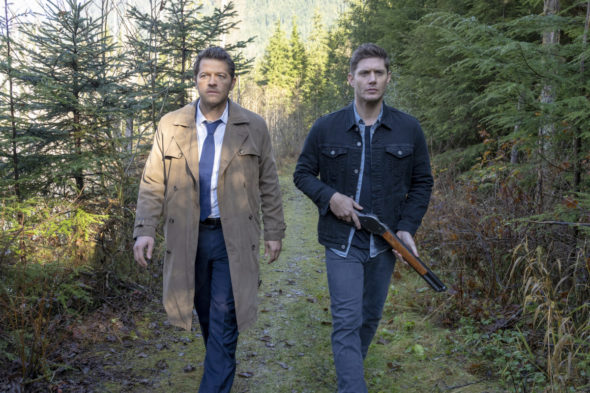 How does Supernatural end for Castiel? Recently, star Misha Collins spoke with Variety about the final episodes of the CW TV show.

Collins plays the angel Castiel on the long-running drama series, which is currently in its 15th and final season. The cast also includes Jared Padalecki, Jensen Ackles, Rob Benedict, and Alexander Calvert.

Supernatural only has a few episodes left before the series finale, so what can fans expect from the end of the The CW series? Collins says it’s all about sacrifice:

It’s always been about this dynamic interplay between fighting the forces of the universe and fighting for the last remaining threads of a tattered family. Ultimately as we get closer to the end of the season it’s not about compromise, it’s about sacrifice — it’s about characters making huge sacrifices for one another.”

Collins then revealed the final day of shooting had a somber mood:

This was a very, all-around, super somber night. Everyone [was] being honestly strangely respectful of the process of acting but also really connected and emotional, and it felt like a night of grieving. It was really intense. Cass’ final moments are really him taking the reins and making really hard choices, but definitely of his own free will.”

So will fans be satisfied with the finale? Collins says the last episode is very “poignant”:

What do you think? Are you a big fan of Supernatural? Are you excited for the finale?

So sad to see that the show is ending. watched from the very beginning. The guys have done a great. Don’t know what I will be watching on Thursday nights now. will truly miss this show

So sad to see this show end. But all things must at some time. I have watched this from day one in 2005. They were young and so good looking. I love seeing the old episodes of the age progression and hairstyles then and now. They remind me of my two sons who are 50 and 52 now. One is brown hair and brown eyes and tall like Jared and the other is blond and blue eyes and a little shorter like Jensen. I love these guys and all the characters that have come to the show. Especially miss Crowly.… Read more »

I have been watching from the very first episode. I have every Season DVD and l am so sorry it has to come to an end but l know the guys have done a great job and I appreciate all everyone has brought to making SUPERNATURAL a great show. Thanks for all 15 years

OMG! I AM GOING TO CRY THE LAST EPISODE! I AM REALLY GOING TO MISS MY BOYS. WHAT WILL I DO ON THURSDAY NIGHT?

I really hope this not the conclusion. It was mentioned that they will return in the future. I hopefully a movie. Ty, the company family and the supernatural family for giving theach best tvalue show in TV history besides vampire diaries. Aloha for now. Hope you gave is a non tear jerker finale

I hate to see Supernatural end. It is my favorite program of all time. I just hope they all go to a better place and see all their friends and relatives that have died during the last 15 seasons.

I can’t wait to see Supernatural last episode and the future role/new series that will come Misha Collins way.

I have been watching the show since 2005 and I could watch it for another 15 years, probably will since I bought the entire series just in case they ever do stop showing it. I’m excited and sad at the same time, I just hope that however it ends that they’re all ❤ together.