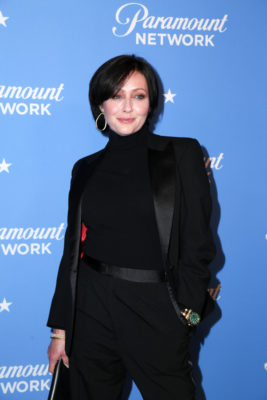 Riverdale has something special planned for season four. It was just announced Shannen Doherty will guest star on the CW TV show’s upcoming season.

Season four of Riverdale premieres on The CW on October 9 at 8 p.m. ET/PT.

BURBANK, Calif. (July 21, 2019) – Riverdale executive producer Roberto Aguirre-Sacasa announced at today’s Comic-Con 2019(R) panel that the season four premiere will feature a special tribute to Luke Perry. Perry’s longtime friend and former costar Shannen Doherty will guest star in a special role in the episode, which will air Wednesday, October 9, at 8/7c on The CW. Entitled “Chapter Fifty-Eight: In Memoriam,” the season premiere will reflect Luke Perry’s enduring legacy and the indelible imprint his character, Fred Andrews, had on Riverdale.

The casting of Doherty continues her long association with Perry, which started in 1990 on Beverly Hills, 90210, and continued for nearly 30 years. Perry and Aguirre-Sacasa had long planned for Doherty to appear on Riverdale. Her presence on the series “is something that Luke wanted to happen since season one,” said Aguirre-Sacasa. “They were such good friends, and when we were putting together this tribute episode, we wanted to make it as special as possible, and so we asked Shannen to do a pivotal, super-emotional role. She read the script and immediately said ‘yes.’ It’s very impactful.”

It was also announced at the show’s Comic-Con panel that Kerr Smith (The Fosters, Life Unexpected) will play Riverdale High’s new principal, Mr. Honey, in a recurring role. Smith will first appear in the second episode of season four, entitled “Chapter Fifty-Nine: Fast Times at Riverdale High.” Aguirre-Sacasa describes Smith’s character as “a bit of a hard-ass who takes a harder line with the students this year, especially with the seniors.”

Based on the Archie Comics characters, Riverdale is from Berlanti Productions in association with Warner Bros. Television and CBS Television Studios. Roberto Aguirre-Sacasa, Greg Berlanti, Sarah Schechter and Jon Goldwater are executive producers. Season four of Riverdale airs Wednesdays at 8/7c on The CW.”

What do you think? Do you watch Riverdale? Are you looking forward to season four?