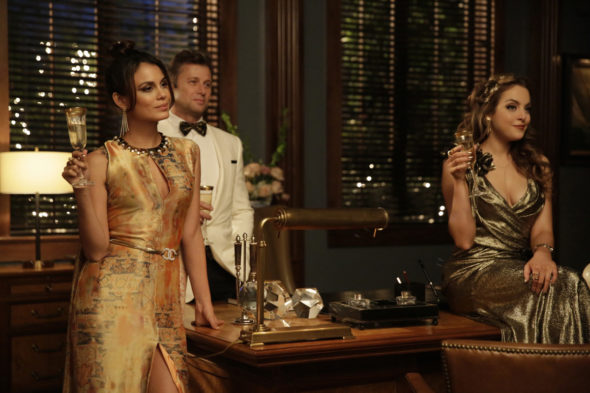 The Carringtons may be back, but it seems they’re not bigger than ever. The CW is moving its Dynasty TV show reboot from Wednesdays to Friday nights. It will take over the slot currently filled by Crazy Ex-Girlfriend, after the comedy finishes its third season run. Look for season one of Dynasty on Fridays, beginning March 9, 2018 at 8:00pm.

Dynasty, which had been following season two of Riverdale on Wednesdays, will be replaced by the new comedy TV series, Life Sentence. On Fridays, Dynasty will anchor the night and will be followed by Jane the Virgin, until season four wraps. Beginning April 20th, Dynasty will lead into the fifth and final season of The Originals, a spin-off of The Vampire Diaries, which ended its eight season run in 2017.

Dynasty: A Look at the Ratings

The first season of Dynasty is averaging a 0.22 rating in the 18-49 demographic and 773,000 viewers. Of the 10 CW TV shows we’re currently tracking, that demo number means Dynasty is tied for last place with Valor and Crazy Ex-Girlfriend. In terms of total audience size, it’s ranked seventh out of 10. Don’t be surprised if The CW cancels Dynasty after its first season. If it manages to eke out a renewal thanks to its overseas profits, there could be some major changes next year, to shake things up.

Here’s The CW’s press release with all the details about its mid-season premiere dates.

“The Originals” are Back for Their Final Season Friday, April 20 at 9pm

January 7, 2018 (Pasadena, CA) – The CW Network today announced dates for the series premiere of the heartfelt new comedy LIFE SENTENCE, as well as the returns of IZOMBIE, THE 100, and the final season premiere for THE ORIGINALS.

What do you think? Are you a fan of the Dynasty TV series reboot? Should it be cancelled or renewed for season two on The CW?

Show went too far with diversity. Blake shouldn’t have a Latino wife. Culhane & The Colby’s should so not be black. So far all I’ve seen is Gillies in bed with one black guy after another. Jeff’s sister Monica should not exist at this point and I’m not sure Sheridan is Alexis but I’m watching it

I love this new reboot, and the fact that it is so similar to the iconic series of the 80’s. It is refreshing seeing a programme like this on tv these days, with so many superhero programmes and formulaic dr/crime series so dtnasty is like a breath of fresh air.
Having been a huge fan of the original series I like this reboot, as unrealistic and contrived parts of it are, it’s escapism and fun to watch.

Cancel it. It used to be a joke at Spelling that if a show needed a boost, Aaron would proclaim “Get me Heather Locklear!” Probably not true, but he used her a lot. What no producer ever said when they needed a boost for their show was “Get me Nicolette Sheridan!” No one. Ever. This “reboot” is wretched. Two episodes at different points was enough to confirm that for me.

I loved the 1st Dynasty and I’m loving this one as well, I DVR everything so it doesn’t matter what night it’s on for me…

how could anyone not like the new Dynasty??? It is amazing, the character are fantastic, your on the edge of your seat! Fallon is the best character, love her!

I love my venezuelan telenovela, I hope it gets at least a second season