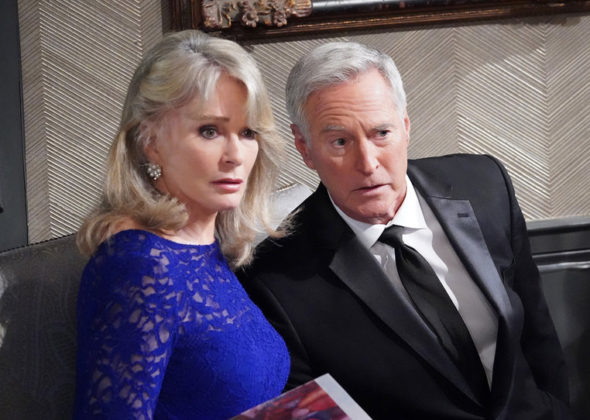 Peacock wants to continue visiting old friends from the Days of Our Lives family. The streaming service has renewed Beyond Salem for a second season. The five new episodes will be released the week of July 11th.

The second season’s cast will include Lucas Adams, Kristian Alfonso, Camila Banus, Mary Beth Evans, Stephen Nichols, and Peter Reckell, as well as Hall and Hogestyn (pictured above). Additional cast members are expected to be announced in the future.

The plot for season two was described this way:

In an epic, action-packed tale that spans the entire globe, from Monte Carlo to Hong Kong, beloved characters from Days of Our Lives once again go Beyond Salem as they trade the comforts of home for an adventure of a lifetime! Over the course of five thrilling episodes, heartwarming family reunions take a dangerous turn as a mysterious adversary wreaks havoc on their lives. The next chapter of Beyond Salem is story full of larger-than-life romance, jaw-dropping twists, and high-stakes drama – and it all connects back to a plot that long-time DOOL fans will surely remember.

“We are beyond thrilled to be partnering with Peacock again to produce a second chapter of Days of Our Lives: Beyond Salem,” said executive producer Ken Corday. “Being able to build off of the storylines from Days of Our Lives to create another exciting series for the audience brings myself, the Corday Productions team, and the cast so much joy. I cannot wait for the fans to see what we have in store next!”

Check out our status sheets to track new TV series pickups, renewals, and cancellations. You can find lists of cancelled shows here.
What do you think? Have you watched the Days of Our Lives spin-off series? Are you glad to hear that Beyond Salem will return for season two?

I also hope this is free on Peacock. I saw the 1st spin off which was, then I couldn’t watch the Christmas episode because they put it on Peacock plus. If it is also on Peacock plus then I won’t be able to watch it.

Actually, General Hospital is the oldest soap on the air. They will hit 60 years a year from now. Days is not far behind though, going on 57 years.

These are the only two soaps that ever aired in Hell.

Uh… a Devil’s eyes must be playing tricks on him….. Did I just read that Bo & Hope would be part of this show….. even though Bo has been dead for years (no, he’s not in Hell!) and Hope has been AWOL since COVID?

So either this is another dumb “alternate timeline” thing (see the Xmas episode) or my old friend Dr. Rolf found a way to cure brain cancer, along with his usual zombie serum.