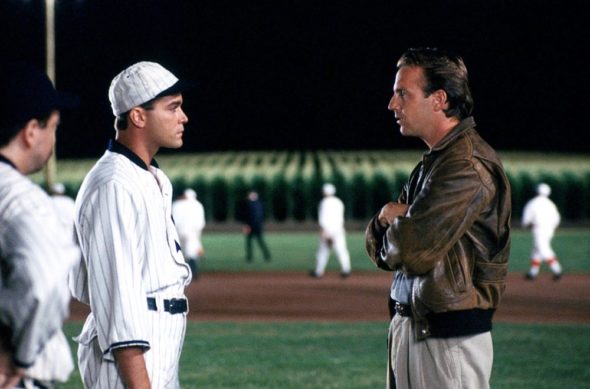 The Field of Dreams reboot is not moving forward at Peacock. The streaming service ordered the series in August but has now cancelled the project.

However, the series may still come to television. Universal Television is seeking another home for the series. It’s based on the 1989 Kevin Costner film of the same name. The movie is based on W. P. Kinsella’s 1982 novel, Shoeless Joe.

Per The Wrap, the series is being written by Michael Schur (The Office, The Good Place) and is described as “a loose retelling of the feature film, which starred Costner as Ray Kinsella, a farmer in Iowa who, encouraged by an unknown, ethereal voice, builds a baseball diamond in the middle of his cornfield.”

What do you think? Did you plan to watch the Field of Dreams reboot series? Do you hope the series finds another home?

Great film, but probably not enough material for a full series. If it does get made, I bet the lead actor isn’t Caucasian.

Great film, but not enough for a full series. If it does get made, I guarantee the lead actor won’t be a white guy.

I haven’t seen the movie yet. I’ll watch that. But I’ll still go as far as to say that it didn’t need a television reboot or a film reboot for that matter, because people need to stop rebooting things.

I have no plans to watch this series regardless of where it ends up.

I’d check it out if it gets picked up. Will require good writers and talent right out of the gate to succeed.

Good idea need let go of certain entertainment 40 years ago. Leave it alone so good movie nothing compare to Kevin Costner is the best.

Well frankly speaking that’s what they should do it most of these reboots leave Them and let it be in the past enough of this crap.