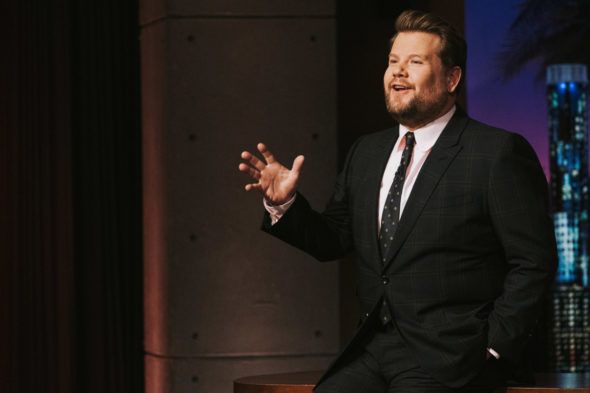 Today, James Corden revealed that he had signed a contract to continue hosting The Late Late Show for the upcoming 2022-23 season. The host also said that this would be his final year with the CBS program and will depart after eight and a half years.

In September 2014, Corden signed on to host The Late Late Show, and his version of the series premiered on March 23, 2015. Corden took over the post from Craig Ferguson who had hosted for nine years.

On tonight’s show, Corden shared the news with his audience and said, “Before we go to break, I have some news of my own to share with you. Seven and a half years ago, I started hosting this show. And there’s no other way to put it — it has changed my life. I love it, I love all the people that work here. I am so proud of what we have achieved. It has been beyond my wildest, wildest dreams. So, I’m happy to announce today that I’ve signed a new contract to carry on hosting The Late Late Show.”

The audience cheered but Corden stopped them and then continued. “I appreciate it but that’s really only half the story on this one. The other half is the sadder news. I’ve signed for one more year of the show, and this will be my last.” He started to choke up and the audience started to boo before he chided them and smiled, “Don’t you dare.”

The host went on to say, “When I started this journey, it was always going to be just that. It was going to be a journey, an adventure. I never saw it as my final destination, and I never want this show to overstay its welcome. I always want to love making it. And, I really think in a year from now that that will be a good time to move on to see what else is out there.”

“But look, we are not leaving today. We are all determined to make this the best year we have ever had. We are going to go out with a bang. There’s going to be Carpools and Crosswalks and sketches and other surprises and there will be tears, so many tears. Because this has been the hardest decision I’ve ever had to make. I never took this job for granted, ever. Not once. And the fact that you watch this show at home or online and we get to try to entertain you and spend time with you, is an absolute privilege for me and everyone else who makes this show. Here’s to the next 12 months. It’s going to be a blast. I promise you that,” Corden concluded.

What do you think? Have you enjoyed watching The Late Late Show with James Corden on CBS? Are you disappointed that the series is ending in 2023 or, is it time for someone new to take over?

I enjoy The Late Late Show and will be sorry to see it end. All the creativity with Carpool Carioca etc make me DVR every show so I can watch many times! So happy that at least we have One More Year! Love to James and everyone on the show! Best of luck in the future!!!

Wow great news on my nerves annoying comedian talk show time to go glad to hear. Next fall won’t back it’s wrap up.

good ridden won’t miss seeing his stupid show pop up on my tv.