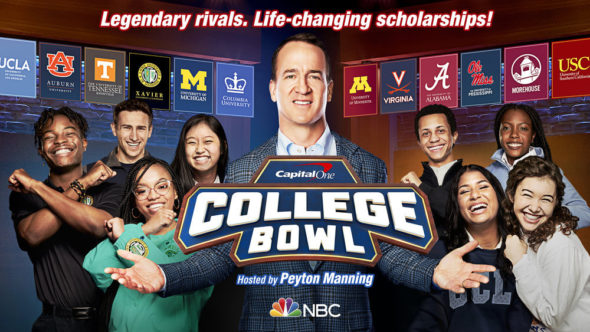 The original version of College Bowl began on radio in the 1950s, moved to television, and has aired on various channels over the years. How long will this latest incarnation last? Will Capital One College Bowl be cancelled or renewed for season two? Stay tuned.

A quiz series, the Capital One College Bowl TV show is hosted by former NFL quarterback Peyton Manning, with his brother Cooper Manning serving as sidekick. The series challenges college students out of the classroom and puts their knowledge to the test as they compete for academic scholarships. In each episode, teams of three represent some of the nation’s top schools and battle it out in a bracketed tournament over four rounds. Teams must work together to answer questions on a wide variety of subjects. The top two schools advance to the final portion of the game where they compete head-to-head for the Capital One College Bowl trophy and a scholarship to put toward their education.

7/21 update: You can see the latest night’s ratings in context.

What do you think? Do you like the Capital One College Bowl TV series on NBC? Should it be cancelled or renewed for a second season?

About as cringe-worthy as anything you have seen on TV in a long time. Who thought that the Mannings would be good for this? In 5 seconds you know they’re not. And don’t even get started on the writing…

Having Peyton and Cooper diminishes the intelligence of the contestants!