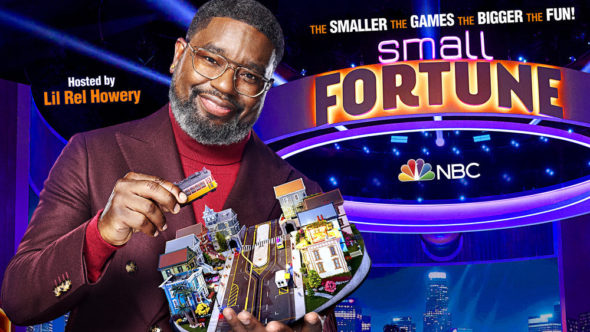 NBC has had some solid ratings success with airing competition series during the summer months. Now, the peacock network has introduced a new one. Could this series about tiny challenges be a big hit? Will Small Fortune be cancelled or renewed for season two? Stay tuned.  *Status Update Below.

Based on the British game show of the same name, the Small Fortune TV series is hosted by Lil Rel Howery. In each episode, teams of three people from various backgrounds (first responders, Olympians, etc.) compete in the tiniest of challenges for a chance to win big money. In order to win, players must face heart-pounding tasks set in real-world destinations that test their precision and technique. Teams that make it to the end must tackle one last teeny-tiny and epic game — the “Big Little Heist”. If players can control their nerves and avoid the slightest mistake, they will walk away with a $250,000 cash prize.

7/20 update: You can see the latest night’s ratings in context.

What do you think? Do you like the Small Fortune TV series on NBC? Should it be cancelled or renewed for a second season?

I love mini things. BUT not sure if game will b renewed

I think Small Fortune show is AMAZING!!!! Something so fresh and new!! We ALL love it here and Can’t WAIT for the next episodes!! We hope it stays!! It’s all we watch! That and American Ninja Warrior and The bachelorette/bachelor. Small Fortune really is an awesome show!! Very creative and addictive!!❤️❤️

meant to say that the points should not be reduced to 1/4 or 1/5 of what they had………there should be a way to edit comments before they are approved. the end.

Needs work. Camera work during shows doesn’t show detail or create the necessary tension to make this a winner. The announcer needs a name…….so Rel can say Hey to a name not just Announcer. And why did the amazing Olympians end up with such a small amount to take home? Didn’t feel like it was explained……think they should have kept what they already won…..and had the right to do the final challenge or walk away with their winnings. Second episode watched and despite a very likeable host this show is just off overall……we like game shows, but this one falls… Read more »

I think the show is the worst SHOW YOU HAVE EVER CAME OUT WITH. YOU NEED TO PAY PEOPLE TO WATCH IT. F-.