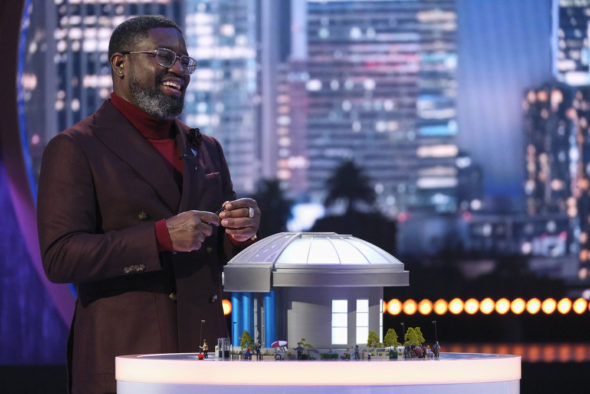 Which team members have the most precise dexterity? Has the Small Fortune TV show been cancelled or renewed for a second season on NBC? The television vulture is watching all the latest cancellation and renewal news, so this page is the place to track the status of Small Fortune, season two. Bookmark it, or subscribe for the latest updates. Remember, the television vulture is watching your shows. Are you?

Airing on the NBC television network, the Small Fortune game show is hosted by Lil Rel Howery. In each episode, teams of three people from various backgrounds (first responders, Olympians, etc.) compete in the tiniest of challenges for a chance to win big money. To win, players must face heart-pounding tasks set in real-world destinations that test their precision and technique. Teams that make it to the end must tackle one last teeny-tiny and epic game — the “Big Little Heist”. If players can control their nerves and avoid the slightest mistake, they will walk away with a $250,000 cash prize.

The first season of Small Fortune averaged a 0.29 rating in the 18-49 demographic and 1.40 million viewers in the live+same day ratings (including DVR playback through 3:00 AM). While these numbers don’t include further delayed or streaming viewing, they are a very good indicator of how a show is performing, especially when compared to others on the same channel. There can be other economic factors involved in a show’s fate, but the higher-rated series are typically renewed and the lower-rated ones are cancelled. Find out how Small Fortune stacks up against other NBC TV shows.

Will NBC cancel or renew Small Fortune for season two? The show likely isn’t very expensive to produce but the network already has several established game shows. I think this one could go either way but I’m leaning toward a renewal. I’ll update this page with breaking developments. Subscribe for free alerts on Small Fortune cancellation or renewal news.

What do you think? Were you hoping that the Small Fortune TV show would be renewed for a second season? Are you disappointed that NBC cancelled this TV series, instead?

Hi, this show has been cancelled per Deadline, so there won’t be a second season. Kind of sad, because it was quite fun to watch.