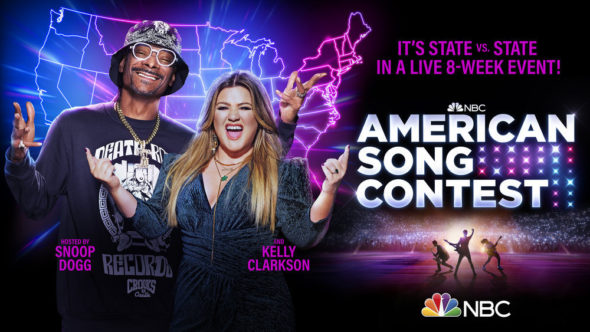 The execs at NBC realized that The Voice’s popularity has been waning so they decided to air just one cycle a season, to make it more of an annual event series. They’ve been trying to find worthy successors to fill its timeslots on the spring schedule but, does this new show measure up? Will American Song Contest be cancelled or renewed for season two? Stay tuned.

A music reality competition series, the American Song Contest TV show is hosted by Snoop Dogg and Kelly Clarkson. The series features live original musical performances, representing all 50 states, five U.S. territories, and our nation’s capital. The music artists compete to win the country’s vote for the best hit song. The 56 artists span a wide range of genres and performers – from undiscovered talent, up-and-coming new artists, and rising stars to established and legendary icons. The competition consists of three rounds as the artists compete in a series of Qualifying Rounds, followed by the Semi-Finals and the ultimate Grand Final where one state or territory will emerge victorious.

5/10 update: You can see the latest night’s ratings in context.

What do you think? Do you like the American Song Contest TV series on NBC? Should it be cancelled or renewed for a second season?

Forcing viewers to wait an entire week for results was what turned me off. If you absolutely can’t do a results show, at least put the results on the Today Show or Fallon. No other show announces the results 5 days after they’ve been counted for good reason. I’m not saying that’s where they went wrong. I’ll let the industry experts decide that. But it certainly didn’t help matters.

Please renewed season 2. Look forward to catch up on this on Hulu. Seem good idea producer enjoy it and love it. Anything with good judges.

I live in Europe (Sweden) and we have this type of annual song contest. I have to say this American version was really boring… I had expected it to be more fun and firey than our version! I liked to hear the music and see all the very different performances but, it is way too lengthy and the talking in-between songs is too long as well. They should have made a contest with more spark, and as someone below stated – the hosts really don’t do well together. All in all, the idea is fine but the presentation is slightly… Read more »

sorry, couldnt get past the first episode…boring! not being a snoop fan didnt help & he & Kelly had no chemistry.