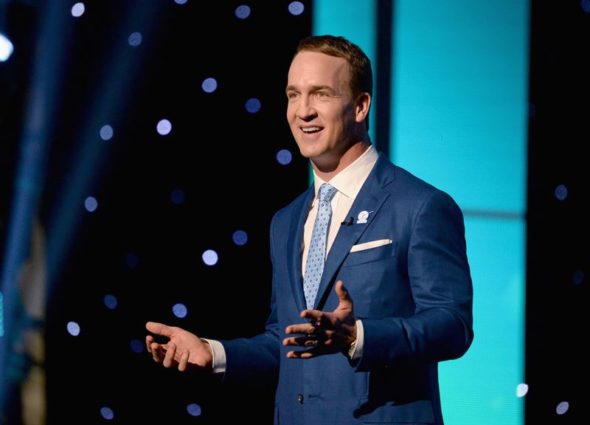 College Bowl is coming to NBC. The network has rebooted the classic quiz show with Peyton Manning as host of the competition. His brother, Cooper Manning, will be on the sidelines reporting on the game. A dozen colleges will go head-to-head in the quiz show until only one school remains.

NBC revealed more about the College Bowl reboot in a press release.

“Some of the greatest rivalries among the nation’s universities are being moved from the playing field to the quiz show space as NBC has given a series order to the iconic program College Bowl, hosted by two-time Super Bowl champion quarterback Peyton Manning, with his brother Cooper Manning as sideline reporter.

From Universal Television Alternative Studio and Village Roadshow Television, the 10-episode series is a reboot of the classic College Bowl that previously aired successfully on NBC in the U.S, internationally and on college campuses for many decades. All in the spirit of fun, “College Bowl” has been a beloved competition where universities get to see who comes out on top in a battle of the brains.

Participating teams will be selected from schools of all sizes with the individuals receiving a significant scholarship for participating in College Bowl. The winning team members will have a chance to take home even bigger scholarships, in addition to bragging rights as the College Bowl champions.

“We’re excited to bring this beloved college game show back to primetime with a fresh new spin that is sure to not only entertain but also inspire,” said Jenny Groom, Executive Vice President, Unscripted Content. “Peyton’s love for competition, sport and education makes him the perfect host and partner. It will be so much fun to showcase these college rivalries and, more importantly, the incredibly smart and talented students behind them.”

Added Peyton Manning, “I’ve always loved intense college competition, so I’m thrilled to be part of the team bringing back ‘College Bowl.’ Having personally seen the profound impact scholarships can make on deserving students, I can’t wait for the moment when we get to award life-changing scholarships to the winning team.”

Twelve schools will compete in a bracketed tournament over four rounds where teams vie for the most points. The top two teams will advance to the final where they compete head-to-head and where one will ultimately declare victory.

The only five-time Most Valuable Player in NFL history, Manning played 18 seasons and finished his career as the league’s all-time winningest quarterback (200 wins). He is the only quarterback to lead two different teams to a Super Bowl victory, earning MVP honors in Super Bowl XLI with the Colts (2006) before helping the Broncos to a win in Super Bowl 50 (2015) in the final game of his illustrious career.

Cooper, the oldest of the three Manning brothers, has earned national recognition for his humor and wit as host of The Manning Hour on FOX NFL Sunday.

What do you think? Are you a fan of Manning? Will you watch College Bowl on NBC?

This sounds like a fun show. I think NBC has already set the premiere date as June 22 (according to its press release and it is known as “Capital One College Bowl”), so look forward to watching the show when it premieres.