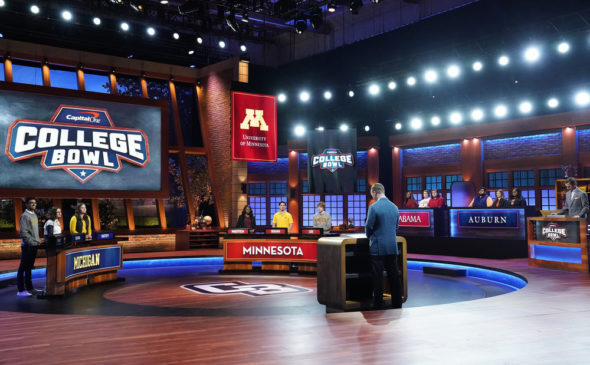 It’s back to school for the peacock network. NBC has renewed the Capital One College Bowl program for a second season. The first season of 10 episodes finished airing in September. Casting is currently underway for season two. A premiere date will be announced in the future.

A quiz series, the Capital One College Bowl TV show is hosted by former NFL quarterback Peyton Manning, with his brother Cooper Manning serving as a sidekick. The series challenges college students out of the classroom and puts their knowledge to the test as they compete for academic scholarships. In each episode, teams of three represent some of the nation’s top schools and battle it out in a bracketed tournament over four rounds. Teams must work together to answer questions on a wide variety of subjects. The top two schools advance to the final portion of the game where they compete head-to-head for the Capital One College Bowl trophy and a scholarship to put toward their education.

Airing on Tuesday nights, the first season of Capital One College Bowl averaged a 0.39 rating in the 18-49 demographic and 2.44 million viewers in the live+same day ratings (including DVR playback through 3:00 AM). The show was a middle-of-the-road performer compared to NBC’s other summer shows, ranking fourth of seven programs.

· NBC’s “Capital One College Bowl” returns for a sophomore season with hosts Peyton Manning and Cooper Manning as the nation’s greatest colleges and universities face off in the ultimate battle of brains.

· Led by 19 time Emmy Award winner Harry Friedman, who oversaw both “Jeopardy!” and “Wheel of Fortune” for over 25 years, this year’s crop of 16 elite teams representing some of the nation’s top schools will go head-to-head. Infused with brand new rounds of gameplay, the series will feature multiple schools in each episode.

· Capital One returns to award $1 million in life-changing scholarships, providing all the student competitors with tuition assistance for their participation. The winning team will take home a scholarship and claim victory as “Capital One College Bowl” champions. Last season the team from Columbia University beat out rivals from the University of Southern California to take the title.

· With a wide variety of subjects, teams must work together to test their knowledge in a five-round tournament. The top two schools advance to the final where they compete for the coveted Capital One College Bowl trophy.

· The fan favorite “Capital One Two-Minute Drill” will return, adding even more suspense to this high-stakes competition.

· From Village Roadshow Television and Universal Television Alternative Studio, a division of Universal Studio Group, the series is an update of the classic Emmy and Peabody Award-winning “College Bowl” that previously aired on NBC in the U.S. and for decades has been part of campus life at colleges and universities around the world.

· Casting for the new season of “Capital One College Bowl” is currently underway. More information can be found at CollegeBowlCasting.com.

ABOUT CAPITAL ONE
At Capital One we’re on a mission for our customers – bringing them great products, rewards, service, and access to unique and unforgettable experiences they are passionate about. Capital One is a diversified bank that offers products and services to individuals, small businesses and commercial clients. We use technology, innovation and interaction to provide consumers with products and services to meet their needs. Learn more at capitalone.com.

What do you think? Have you watched previous incarnations of this quiz show on television? Are you glad that Capital One College Bowl has been renewed for a second season?

I’m really excited for another season of capital one college bowl with Peyton Manning and Cooper Manning, I want to see Ohio colleges on the next season.