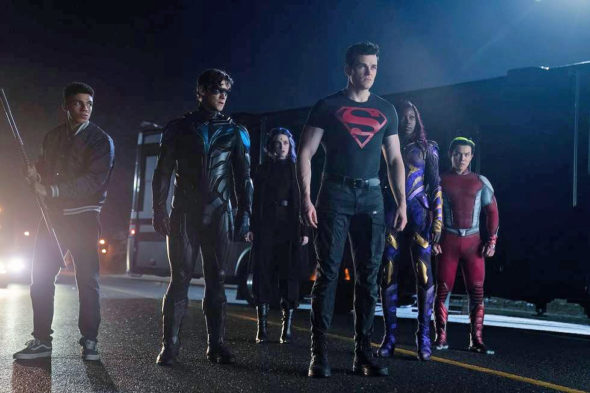 The team is breaking up. The Titans TV series has been cancelled by HBO Max. There won’t be a fifth season, but the live-action show’s not over just yet.

A superhero action-adventure drama series, the Titans TV show stars Brenton Thwaites, Anna Diop, Teagan Croft, Ryan Potter, Joshua Orpin, Jay Lycurgo, Franka Potente, and Joseph Morgan. Based on the DC Comics characters, the live-action superhero drama centers on the core team of Nightwing aka Dick Grayson (Thwaites); Rachel Roth aka Raven (Croft); Koriand’r aka Starfire (Diop); and Garfield Logan aka Beast Boy (Potter). These heroes band together to form the Titans and fight off a powerful enemy while winding up working as a surrogate family. In season four, the team members find themselves in the crosshairs of a supernatural cult with powers, unlike anything they’ve faced before.

The current fourth season is comprised of 12 episodes that are split into two parts. The first six episodes finished being released on December 1st. The second half dozen installments will be released at some point this year.

The Doom Patrol series has also been cancelled, and its final fourth-season episodes have yet to be scheduled.

“While these will be the final seasons of Titans and Doom Patrol, we are very proud of these series and excited for fans to see their climactic endings,” an HBO Max spokesperson said. “We are grateful to Berlanti Productions and Warner Bros. Television for making such thrilling, action-packed, heartfelt series. We thank Titans showrunner Greg Walker, executive producers Greg Berlanti, Akiva Goldsman, Sarah Schechter, Geoff Johns, Richard Hatem, and the team at Weed Road Pictures. For Doom Patrol, we celebrate showrunner Jeremy Carver and executive producers Greg Berlanti, Sarah Schechter, Geoff Johns, Chris Dingess and Tamara Becher-Wilkinson. For four seasons, fans have fallen in love with the Titans and Doom Patrol, investing in their trials and tribulations, and in their legendary battles saving the world time and time again.”

“I’m immensely proud of our gifted cast, crew, and writing staff and their efforts in bringing to life all 49 episodes over the last five plus years,” showrunner Walker said. “I couldn’t have asked for better partners in Berlanti Productions, Warner Bros. Television, and HBO Max, and from the beginning, Geoff Johns and Akiva Goldsman. I’m incredibly grateful for their unyielding trust throughout this process. Lastly, I have to thank our incredible fans for their continued support, engagement, and the passionate community they’ve built around our show. We have six episodes left to unleash upon the world that we hope will give our beloved characters the creative closure we all know they deserve.”

Director James Gunn, a co-chairman and co-CEO of DC Studios since November 1st, noted the decision to cancel the DC series was made before his tenure. He added, “I certainly wish the best for the talented group of creators, actors, and the rest of the crew that produced both shows.”

What do you think? Have you been enjoying the Titans TV series? Are you disappointed that there won’t be a fifth season? Were you expecting the HBO Max cancellation?

continuing to clean out the superhero stuff

I’m it was canceled. Terrible show prefer the animation ones instead

Way better live action than cartoon superhero very fun and enjoy it watch more think should got renewed another season. My opinion.

Darn! I’m going to really miss both of these shows. So much fun … .