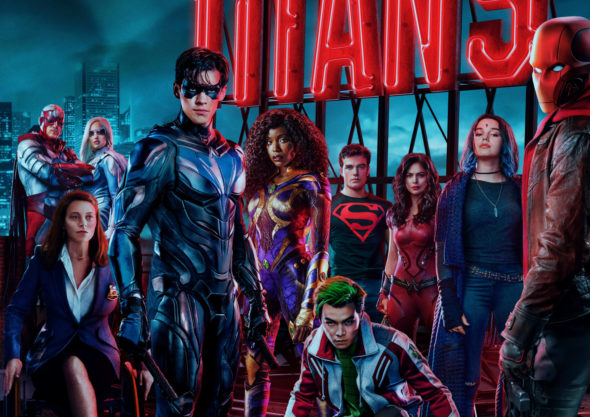 Can Nightwing come home again? Has the Titans TV show been cancelled or renewed for a fourth season on HBO Max? The television vulture is watching all the latest cancellation and renewal news, so this page is the place to track the status of Titans, season four. Bookmark it, or subscribe for the latest updates. Remember, the television vulture is watching your shows. Are you?

Unless they decide to publicize viewership, it is difficult to predict whether HBO Max will cancel or renew Titans for season four. Since HBO Max isn’t ad-supported, it can take a chance on series it believes in, but sooner or later it comes down to production costs, versus viewership numbers. This show is populated by some well-known characters and existing properties tend to perform better than new ones. The series did well enough to be moved to HBO Max when the DC Universe service was moving away from original shows so, I think that Titans has a very good chance of being renewed. I’ll keep my ears open and an eye out for news, and will update this page with breaking developments. Subscribe for free alerts on Titans cancellation or renewal news.

What do you think? Are you glad that the Titans TV show has been renewed for a fourth season? How would you feel if HBO Max had cancelled this TV series, instead?

This show really helped me during tough times, something about it makes me really happy and I hope there would be more seasons 🙂

I hope we get many more seasons! I am loving this show! So glad it got brought to HBO max! Season 3 had been fire. I loved episode 9, so glad Donna is back!

I vote to continue this Saga with another season 4 ! At least to either close of story line or continue with much more in-depth so there can even be a season 5

You cant just leave it a open book … if your going to end it END IT WELL…all for a 4th 5th+.

Lkw
Reply to  Theresa A Chadbourne

Please give us a 4th season best show ever