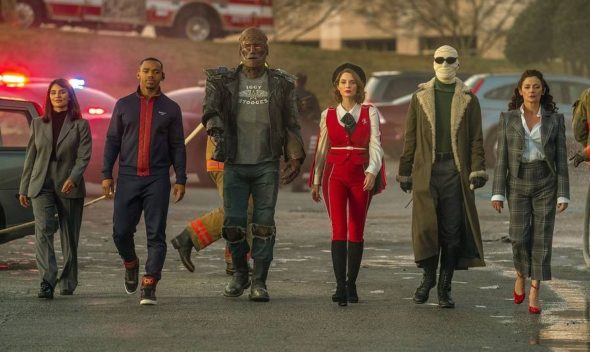 This pack of oddball heroes is getting a big vacation. The Doom Patrol TV series has been cancelled by HBO Max. While there won’t be a fifth season, there are still some new episodes to come.

A comedy-drama series, Doom Patrol stars Diane Guerrero, April Bowlby, Brendan Fraser, Matt Bomer, Joivan Wade, Skye Roberts, and Michelle Gomez. The story centers on a group of unlikely heroes — Robotman aka Cliff Steele (Fraser), Negative Man aka Larry Trainor (Bomer), Elasti-Woman aka Rita Farr (Bowlby), Crazy Jane (Guerrero), Victor Stone aka Cyborg (Wade), Kay Challis (Roberts), and Laura De Mille aka Madame Rouge (Gomez) who all gained their abilities in accidents for following trauma.  In season four, the team unexpectedly travels to the future to find an unwelcome surprise. Faced with their imminent demise, the Doom Patrol must decide once and for all which is more important: their own happiness or the world’s fate?

The current fourth season is comprised of 12 episodes that are split into two parts. The first six episodes finished being released on January 5th. The second half dozen installments will be released at some point this year.

The Titans series has also been cancelled, and its final fourth-season episodes have yet to be scheduled.

“While these will be the final seasons of Titans and Doom Patrol, we are very proud of these series and excited for fans to see their climactic endings,” an HBO Max spokesperson said. “We are grateful to Berlanti Productions and Warner Bros. Television for making such thrilling, action-packed, heartfelt series. We thank Titans showrunner Greg Walker, executive producers Greg Berlanti, Akiva Goldsman, Sarah Schechter, Geoff Johns, Richard Hatem, and the team at Weed Road Pictures. For Doom Patrol, we celebrate showrunner Jeremy Carver and executive producers Greg Berlanti, Sarah Schechter, Geoff Johns, Chris Dingess and Tamara Becher-Wilkinson. For four seasons, fans have fallen in love with the Titans and Doom Patrol, investing in their trials and tribulations, and in their legendary battles saving the world time and time again.”

“To our wonderfully supportive partners at HBO Max, Warner Bros. Television, Berlanti Productions, and DC Studios, thank you for indulging us these past four seasons,” showrunner Carver said. “Also, what were you smoking? To our brilliant cast, indomitable crew, fearless writing staff and, most of all, to our beautiful fans: thank you all the more. You made this a once-in-a-lifetime ride.”

Director James Gunn, a co-chairman and co-CEO of DC Studios since November 1st, noted the decision to cancel the DC series was made before his tenure. He added, “I certainly wish the best for the talented group of creators, actors, and the rest of the crew that produced both shows.”

What do you think? Have you been enjoying the Doom Patrol TV series? Are you disappointed that there won’t be a fifth season? Were you expecting the HBO Max cancellation?

Has any media regime in the history of television done more damage in one year than Zaslav/Malone @ Warner/Discovery??

Yeah, the Murdoch family has literally caused wars, but other than that….