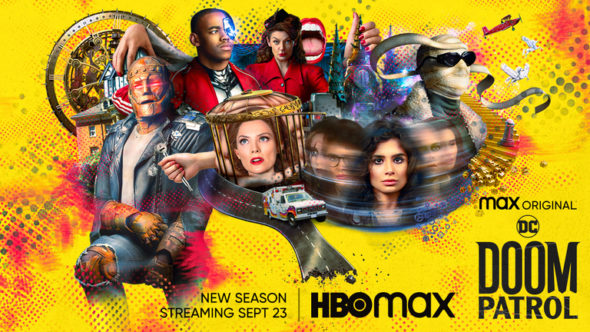 Is there a future for this show about powerful misfits? Has the Doom Patrol TV show been cancelled or renewed for a fourth season on HBO Max? The television vulture is watching all the latest cancellation and renewal news, so this page is the place to track the status of Doom Patrol, season four. Bookmark it, or subscribe for the latest updates. Remember, the television vulture is watching your shows. Are you?

Streaming on the HBO Max subscription service, Doom Patrol stars Diane Guerrero, April Bowlby, Brendan Fraser, Matt Bomer, Timothy Dalton, and Joivan Wade. The superhero drama centers on Robotman aka Cliff Steele (Fraser), Negative Man aka Larry Trainor (Bomer), Elasti-Woman aka Rita Farr (Bowlby), Crazy Jane (Guerrero), and Victor Stone aka Cyborg (Wade) who all gained their abilities in disfiguring accidents. This ragtag team of outcasts comes together under the leadership of mad scientist Niles Caulder aka The Chief (Dalton). In season three, we see the culmination of Dorothy’s (Abi Monterey) confrontation with the Candlemaker that leads to a devastating loss. The Doom Patrol is at a difficult crossroads and each member struggles to face who they are and who they want to be. Things get more complicated when Madame Rouge (Michelle Gomez) arrives in a time machine with a very specific mission — if only she could remember it.

Unless they decide to publicize viewership, it is difficult to predict whether HBO Max will cancel or renew Doom Patrol for season four. Since HBO Max isn’t ad-supported, it can take a chance on series it believes in, but sooner or later it comes down to production costs, versus viewership numbers. I’ll keep my ears open and an eye out for news, and will update this page with breaking developments. Subscribe for free alerts on Doom Patrol cancellation or renewal news.

10/17/21 update: Doom Patrol has been renewed for a fourth season on HBO Max.

What do you think? Are you glad the Doom Patrol TV show has been renewed for a fourth season? How would you feel if HBO Max had cancelled this TV series, instead?

LOVE LOVE LOVE Doom Patrol. It is not your typical predictable super hero show and that is exactly what I LOVE about it. The actress who plays Jane is absolutely amazing and should win an award. All the characters are very interesting and complex which makes the viewer feel a part of the group while learning all the back stories. PLEASE keep this wonderful show going!!

I love this show! The Robot man played by Brendan Frasier is hilarious. All the characters on the show are quite funny.