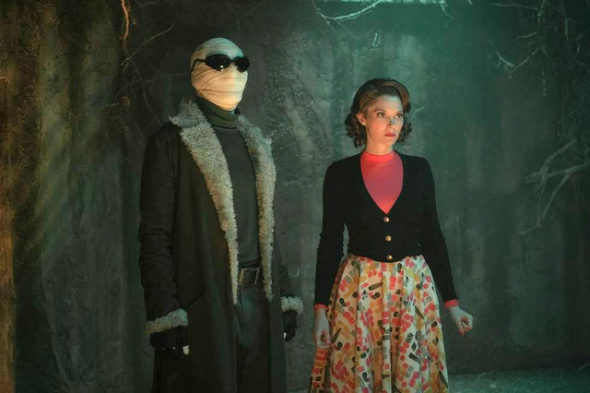 This group of misfits is going to keep working to save the world. The Doom Patrol TV show has been renewed for a fourth season on the HBO Max streaming service. The remaining episodes of season three will start being released on November 11th.

A comedy-drama superhero series, Doom Patrol stars Diane Guerrero, April Bowlby, Brendan Fraser, Matt Bomer, Timothy Dalton, and Joivan Wade. The superhero drama centers on Robotman aka Cliff Steele (Fraser), Negative Man aka Larry Trainor (Bomer), Elasti-Woman aka Rita Farr (Bowlby), Crazy Jane (Guerrero), and Victor Stone aka Cyborg (Wade) who all gained their abilities in disfiguring accidents. This ragtag team of outcasts comes together under the leadership of mad scientist Niles Caulder aka The Chief (Dalton). In season three, we see the culmination of Dorothy’s (Abi Monterey) confrontation with the Candlemaker that leads to a devastating loss. The Doom Patrol is at a difficult crossroads and each member struggles to face who they are and who they want to be. Things get more complicated when Madame Rouge (Michelle Gomez) arrives in a time machine with a very specific mission — if only she could remember it.

Here’s the HBO Max press release about the renewal:

HBO Max announced today at DC FanDome that the Max Original series DOOM PATROL will return for a fourth season and released a mid-season trailer in anticipation of the remaining episodes of season three, which debut weekly on the service every Thursday until NOVEMBER 11.

Full program details are below.
Logline: DOOM PATROL reimagines one of DC’s most beloved groups of superheroes who all suffered a horrible accident that gave them superhuman abilities, but also left them scarred and disfigured. Part support group, part Super Hero team, the Doom Patrol is a band of superpowered freaks who fight for a world that wants nothing to do with them. In season three, the Doom Patrol is at a difficult crossroads and each member struggles to face who they are and who they want to be. And things get a whole lot more complicated when Madame Rouge arrives in a time machine with a very specific mission, if only she could remember it.

New episodes of season three of DOOM PATROL launch every Thursday through November 11.

What do you think? Have you watched the Doom Patrol TV series on HBO Max? Are you glad to hear that this superhero series has been renewed for a fourth season?

bring it on season 4.