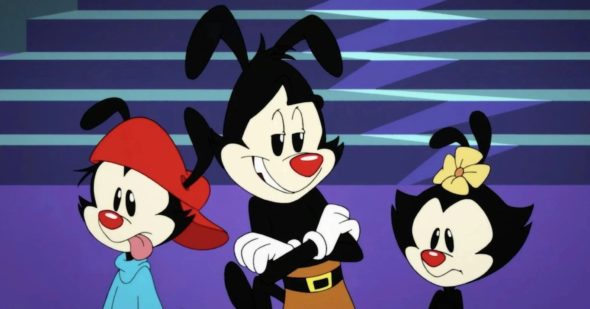 Animaniacs is returning to Hulu for one more season. The streaming service has released a trailer and announced a premiere date for the third season, which will also be the revival’s last.

The animated series follows the Warner siblings — Wakko, Yakko, and Dot — on their crazy misadventures, and Pinky and the Brain, two lab mice who plot to take over the world. Featuring the voices of Rob Paulsen, Tress MacNeille, Jess Harnell, and Maurice LaMarche, the 10-episode final season will arrive all at once, on February 17th.

Hulu revealed the following about season three of Animaniacs:

Yakko, Wakko, and Dot return with an all-new season of laughs, songs, pop culture parodies, and enough zany antics to fill a water tower (or at least 10 episodes!). Pinky and Brain’s never ending plans to take over the world journey them to the ends of new lands, deserts, and even the space time continuum. And while new friends, Starbox and Cindy continue their play date, the Warner siblings must battle their way out of a video game, learn the secrets of being a teen influencer, and escape a mad scientist’s island all while finding time to teach us about the threat of global warming!

Check out the trailer and key art for the series below.

The #Animaniacs are going out with a BANG! 💥 The final season launches February 17 on @hulu! pic.twitter.com/6izfUdLeIT

What do you think? Are you sad to hear that the Animaniacs series is ending after just 30 episodes? How does it compare to the original run?