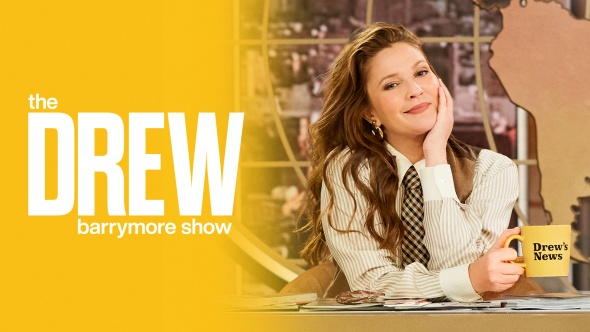 The Drew Barrymore Show is not going anywhere! The syndicated daytime talk show has been renewed for a fourth season, through the 2023-24 television season. Produced by CBS Media Ventures, the series airs on CBS stations in many markets.

The series features celebrity guests, lifestyle segments, and human interest stories. It debuted in September 2020 and more than 425 episodes have aired thus far. This season, the hour-long show was reformatted into two half-hour segments, giving stations the option of airing one or both of them, either together or separately.

More about the renewal was revealed in a press release.

The fasted-growing daytime series “The Drew Barrymore Show” has been renewed through the 2023-2024 season on the CBS Stations, it was announced today by Steve LoCascio, President of CBS Media Ventures.

“This season, ‘The Drew Barrymore Show’ debuted a new reimagined half-hour format, which has been an undeniable success,” LoCascio said. “Ratings have grown 70% year to year, and creatively, the show is better than ever. Drew makes news every day with her insightful celebrity interviews and welcoming style. Nobody does it better. We’re thrilled to have her in the CBS family.”

“It’s gratifying to see ‘The Drew Barrymore Show’ continue to grow creatively and attract larger audiences,” said Wendy McMahon, President and Co-Head, CBS News and Stations. “The new format is working out great for stations, the show and CBS Media Ventures. It makes us very happy that our viewers will be able to continue to enjoy the humor, heart and humanity that Drew, Ross and their colleagues put into each and every episode.”

“The Drew Barrymore Show” is daytime TV’s fastest-growing show this season, as well as the fastest- growing daily show in all of syndication. Season to date, “Drew” is up +70% among total viewers (1.21 million), adding nearly half a million viewers year to year. It ranks as syndication’s #4 talk show. The series had its highest-rated week ever in December with a 0.9 HH rating (week of 12/12). This season, “Drew” has shown steady year-to-year ratings growth on CBS Stations, including in New York (+4%), Chicago (+6%) and Philadelphia (+35%).

“The Drew Barrymore Show” is optimism TV, bringing information, inspiration, and entertainment to the daytime audience. The nationally syndicated daytime show is produced and distributed by CBS Media Ventures and shot in New York City. Known world-wide for her infectious brand of humor and positivity, host Drew Barrymore shares her undeniably relatable point of view on the show while celebrating every part of humanity along the way. Drew’s creating a movement to march in the army of optimism with a multi-topic format. She elevates, inspires and entertains in every area and in every segment from human interest stories to happy news to lifestyle segments and celebrity guests. Join Drew and her Drew’s News co-host Ross Mathews every day as they break down the most surprising and compelling stories from pop culture to human-interest and beyond. Drew Barrymore, Jason Kurtz and Marianne Schaberg are executive producers.

What do you think? Are you a fan of The Drew Barrymore Show? Do you plan to watch season four?