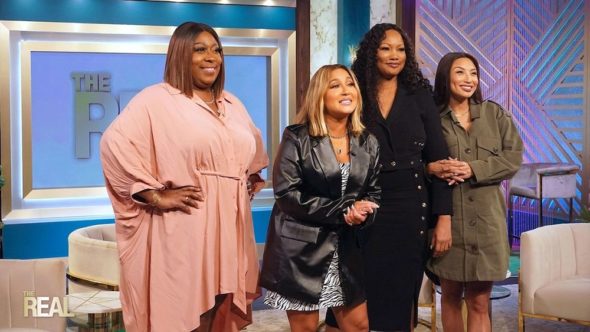 Daytime television will be a little less real in the fall. The Real TV show has been cancelled after eight seasons by Warner Bros. Television. The syndicated daytime talk show airs on Fox-owned stations in major markets, and Variety reports that Fox stations were opting out of bringing the series back next fall. That loss of stations led to the series’ cancellation.

Hosted by Garcelle Beauvais, Adrienne Houghton, Loni Love, and Jeannie Mai Jenkins, the ladies tackle current event topics of the day. The daytime series uses a panel format similar to the one seen on The View on ABC, and

The Real premiered in 2013, and it became a staple of Fox-owned stations in 2014. An end date for the series has not yet been revealed but it won’t be returning in the fall.

One of the show’s hosts, Love, said the following about the show’s cancellation on Instagram.

What do you think? Will you be sad to see The Real end? Did you watch the talk show on your local station? Would you have tuned in for season nine?

Only show I watched everyday. Will miss it terribly. Would love to see everybody boycott Fox morning shows till The Real is renewed. Wish the fans could do something

Rajab, I’m a small business man. But, I always made time to view and
support the REAL; such intellectual WOMEN of HUE: the HUMAN RACE! I found it absolutely interesting, that the WOMEN of the REAL possessed such foresight, dignity all of which added to my understanding how INVALUABLE our WOMEN of HUE are to us men on this earth whom control THE KEYS TO THE COLORS !!! To the REAL, I was deeply saddened to find that the REAL TV SHOW became cancelled. I give my best regards, appreciation, sincere love……THANK YOU ALL, very, very much, the (REAL) !!!

I will hate to see it end.

I think the ratings where up before Covid hit and stayed up. A lot of us liked them at home. I think they were canceled bc of when they came back. The whole show had a different vibe. They should have stayed the way it was b4 Covid or just stayed home and did the show. They seemed to become a gossip show and they were not b4. Sad to see them go

Won a Daytime Emmy by a “fluke”. Watched it several times. The show was too weak. Not enough substance. Lasted 8 seasons because this world is going you know where in a “hand basket”. No Comparison with The View, None. Good-bye, good luck, see ya!!!

I am very sad to here the The Real will no longer be on. This is one of the only talk shows that I watched besides Wendy