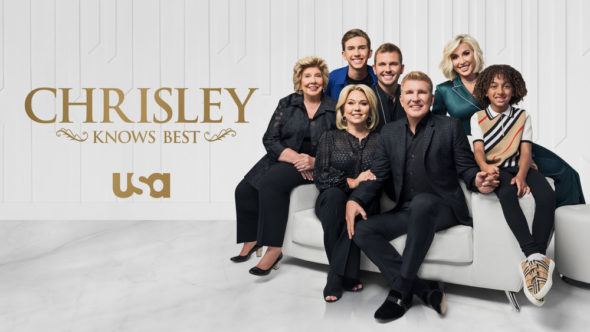 USA Network and E! are reportedly severing ties with the Chrisley family. According to Deadline, the Chrisley Knows Best, Growing Up Chrisley, and Love Limo TV shows have all been cancelled. The move comes after stars Todd and Julie Chrisley were sentenced to a combined 19 years in prison.

Todd was given a 12-year sentence plus 16 months of probation after, in June, being found guilty of conspiring to defraud community banks out of more than $30 million of fraudulent loans. There were also various tax crimes, including conspiring to defraud the IRS. His wife Julie was found guilty of wire fraud and obstruction of justice and was sentenced to seven years with 16 months probation.

Their accountant, Peter Tarantino, was sentenced to three years in prison. He was found guilty of filing two false corporate tax returns on behalf of the Chrisleys’ company.

Chrisley Knows Best, which premiered on USA Network in 2014, follows the lives of Georgia real estate tycoon Todd Chrisley and his wealthy family. The show was renewed for a 10th season in May, and episodes that were filmed before the convictions will air next year.

Spin-off Growing Up Chrisley launched in January 2019 and revolves around two of the couple’s oldest offspring, Chase and Savannah. The first three seasons aired on USA, and the fourth moved to the E! cable channel. The fourth season episodes finished airing last month.

A dating series, Love Limo was ordered to series in May and was to be hosted and executive produced by Todd Chrisley. The E! show would have featured Chrisley helping singles find love utilizing 20-minute interactions.

What do you think? Have you enjoyed the Chrisley reality shows on E! and USA Network? Are you disappointed that these shows have been cancelled?

Love Burn Notice, White Collar tv shows back in the day on aired, Took over network stupid hate reality shows never watched any trash tv never will since day came out . The Voice, American Idol only like topic ever whole life rich ass hole so happy canceling gone forever. But on really make up drama again .

I was sad to learn that the shows have been canceled. I enjoyed them very much. My heart goes out to their children, grandchildren, and Todd’s mother & Julie’s parents. MONEY is not everything in LIFE!!!!! A hard lesson learned

I’m Very disappointed that the shows we cancelled. But what I would like to know is why are the Chrisley kids being punished for something their parents did? I believe the kids should be able to continue with their show since they did nothing wrong.

The kids shouldn’t be punished for mistakes made by their parents. I loved the shows and I hope Savannah and Chase are given the opportunity to create their own show. God bless them and I’m praying for the entire family.

I cannot believe it took this long to cancel them

Talk about Karma. How western society makes fools out of people like this, only it to transpire sooner or later that they are infact criminals wo are committing all sorts of crimes. Television show commissioning and production is littered with choices and shows that turned out to be ‘regrettable’, and this is one of them. I wonder how long it will be before the vile Kardashian empire falls because that pack of greedy no talent people are sure to be committing scams all over. And lets not even talk about the likes of the kiddy fiddliers and rapists that got… Read more »

Well, I figured it was gonna happen eventually after this came out.

I am disappointed that Chrisley Knows Best has been canceled. I wish Todd and Julie didn’t do what they did.

Chrisley Knows Best is the best comedy show ever. I’m very sad that show is canceled due to Todd and Julie Chrisley sentenced to federal prison after being convicted of defrauding banks to obtain more than $30 million in personal loans and evading taxes to fund a lavish lifestyle. Rest in peace Chrisley Knows Best, Growing Up Chrisley, and Love Limo TV!

Yes, put Nanny Faye on her own show with the remaining Chrisleys and their friends!

Nanny Faye was the best part of the show, all the rest of them are boring. Give her her own show where she has to watch the kids until they’re out of jail.