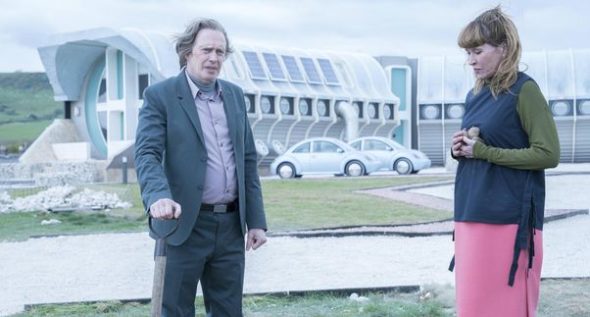 Are there more stories left to tell? Is Philip K. Dick’s Electric Dreams TV show cancelled or renewed for a second season on Amazon? The television vulture is watching all the latest TV cancellation and renewal news, so this page is the place to track the status of Philip K. Dick’s Electric Dreams, season two. Bookmark it, or subscribe for the latest updates. Remember, the television vulture is watching your shows. Are you?

From Ronald D. Moore and Michael Dinner, Philip K. Dick’s Electric Dreams is a sci-fi anthology series based on the short stories of Philip K. Dick. With each episode set in its own reality, some stories unfold in times and worlds which feel familiar, while others take place in distant parts of the universe.

Unless they decide to publicize its viewership, it is hard to predict whether Amazon will cancel or renew Philip K. Dick’s Electric Dreams for season two. On top of that, the series is a co-production with UK Channel4, so its British ratings will have an impact upon the show’s fate. Since Dick was a prolific writer, there is plenty of source material to work with, should they go forward with a second season. I don’t have a strong feeling on this one, except for this — if Amazon cancels this TV series, they will then say it was always meant to be a one season show. For now, I’ll keep an eye on the trades and update this page with breaking developments. Subscribe for free alerts on Electric Dreams cancellation and renewal news.

What do you think? Do you hope Philip K. Dick’s Electric Dreams TV show will be renewed for a second season? How would you feel if Amazon cancelled this TV series, instead?

PLEASE do NOT cancel this series.The storytelling is fun & fresh.The actors include many of my favorites.The ambient music is exemplary.The visuals are stunning and creative.Some of the best TV viewing I have seen in my 65 years! EXCELLENT!!!!

Very smart, creative show that rivals Black Mirror. It would be foolish not to renew for a second season and beyond.. especially considering that the episodes are timeless and would make for great viewing for many years to come.

Love the show!!! Wasn’t sure what to expect based on the name but I love it n how ea episode is its own..

So far I’m 2 shows in and loving it. Please renew!

I was browsing through things to watch on Amazon Prime and ran across Electric Dreams. WOW! Best entertainment I have had in a long time! I have only watched the first 2 episodes so far, but I LOVE it! I certainly hope that there will be a 2nd season.

Amazon, for all their monopolizing nonsense, have NO idea how to market television! The ONLY reason this superb shows sees poor ratings is because of the lack of proper marketing! If it’s money Amazon wants (which is obvious), then some of their executives need to go to marketing school! It’s a shame, shame, shame!

I agree with the poor advertising. I thought this was new but it aired last January. I JUST found out about it bc it played an ad before a show I’m binge watching. I binge a lot of shows on prime and I’ve started watching a lot of shows bc of these small quick ads but this is the first time I’ve seen this one. It has 7 of my favorite actors and actresses so there’s no chance I’ve seen it advertised before. It looks awesome and I can’t wait to start it so I hope it continues.

AMAZON puts out weak crap all the time. Black mirror has a huge following, the only reason Electric Dreams dosen’t also is because of a lack of promotion. Getyour product out there, make some money.

Love BM, but ED is the better of the two. Hats off to Amazon for taking on the challenge but **** or get off the pot.

Please renew this series. This is excellent work!

I hope they renew Electric Dreams. It’s a great show.

Please renew for more seasons. I love this