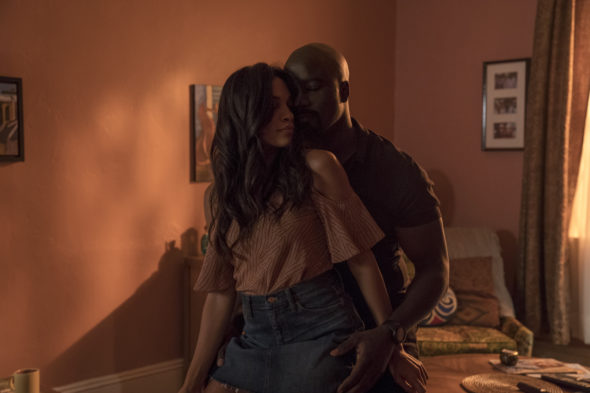 How unbreakable is Luke Cage? Has Marvel’s Luke Cage TV show been cancelled or renewed for a third season on Netflix? The television vulture is watching all the latest TV cancellation and renewal news, so this page is the place to track the status of Marvel’s Luke Cage, season three. Bookmark it, or subscribe for the latest updates. Remember, the television vulture is watching your shows. Are you?

A Netflix superhero drama, Marvel’s Luke Cage stars Mike Colter, Simone Missick, Alfre Woodard, Theo Rossi, Mustafa Shakir, Gabrielle Dennis, and Rosario Dawson. After a sabotaged experiment left him with impenetrable skin and super-strength, Luke Cage (Colter) met Jessica Jones (Krysten Ritter). When his Hell’s Kitchen bar and home blew up, Luke decamped to Harlem, where he just tried to live his own life, until outside forces pulled him back into the fight.

Unless they decide to publicize viewership, it is difficult to predict whether Netflix will cancel or renew Marvel’s Luke Cage for season three. For now, I’ll keep an eye on the trades and press releases and update this page with breaking developments. Subscribe for free Marvel’s Luke Cage cancellation or renewal alerts.

10/22/18 update: Netflix has cancelled Marvel’s Luke Cage so, there won’t be a thrid season. Details here.

What do you think? Were you hoping that the Marvel’s Luke Cage TV show would be renewed for season three? Are you sorry that Netflix cancelled this TV series, instead?