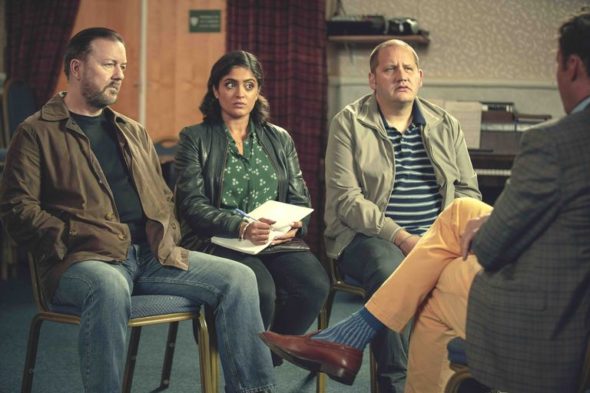 After Life still has more life in it. According to Deadline, Netflix has renewed the Ricky Gervais TV show for a third season.

The dark comedy-drama  centers on the newly widowed Tony (Gervais). Once upon a time, Tony had a great life, but after the death of his wife, Lisa (Kerry Godliman), he decides to change up his approach to living.

Netflixrecently revealed they have negotiated an overall deal with Gervais that includes a third season of After Life, stand-up specials, and more. Previously, Gervais told Deadline he still has plenty of ideas for After Life:

I haven’t run out of ideas, though, because we haven’t gone in depth with a lot of these characters. You can keep twisting the knife. It’s the tip of the iceberg. It’s like, imagine you moved to a town and you’ve met a few people. You’ve spent five hours there. You don’t go, ‘I think I know everything about this town,.”

What do you think? Have you seen After Life? Will you watch season three?

I loved season 1 & 2 of After Life. Delighted there will be another season.

Absolutely will watch season 3, and 4, and 5…… Whatever the produce, well watch. Ricky can do no wrong!!

I absolutely love this series. I am on Season Two right now. Love Ricky Gervaise and all the motley characters!