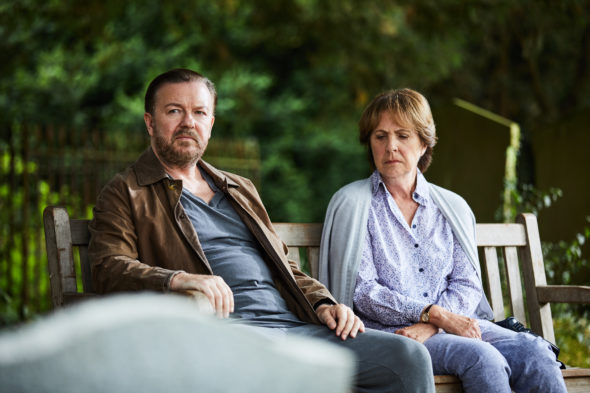 Will After Life live on past season two? Recently, Ricky Gervais spoke with Variety about the future of the Netflix TV show.

The comedy-drama series stars Gervais as Tom, a recently widowed man who decides to live long enough to teach the world a lesson. He intends to mete out this punishment by saying and doing whatever pleases him. The cast also includes Kerry Godliman, Tom Basden, Tony Way, David Bradley, Ashley Jensen, Penelope Wilton, David Earl, and Joe Wilkinson.

On Twitter, Gervais revealed he’s finished writing the first episode for season two of After Life. But what about a third season? Gervais told Variety he is open to a third season of the Netflix series if he has help:

I do – unless I can get some of the cast to help me write the third series and just sit back and just turn up.”

Netflix has not yet announced a premiere date for season two of After Life.

What do you think? Have you seen After Life? Would you watch a third season?

Please please have a third series of AFTER LIFE . Best on tv brilliant

Would definitely support a 3rd season of after life. It is brilliant!