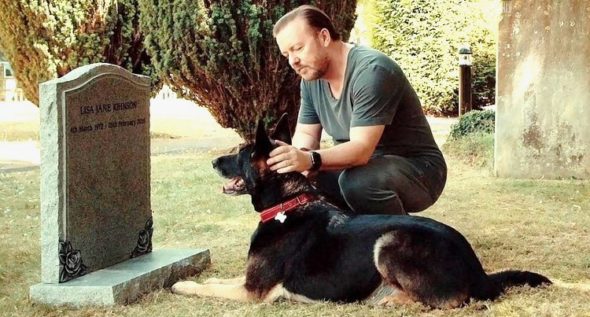 After Life has a little more life in it. As previously reported, the Netflix series will return for a third season. Ricky Gervais recently revealed that he has already written the episodes for season three, but there won’t be a fourth season.

Per The Mirror, he said the following about the end of the Netflix series:

“I’ve already made my mind up there won’t be a four. And you do put those things out there to make you remember as it’s tempting but… there’s an old saying that ‘to lead the orchestra, you’ve got to turn your back on the audience’. That’s true. The audience think they want another one, but they’re not sure. So you’ve got to be careful.”

The actor shared a photo of himself holding a page of the script for season three as well.

A premiere date for season three of After Life has not yet been revealed and it’s unclear when the episodes will be able to be filmed.

What do you think? Are you a fan of this Netflix series? Are you glad you’ll see one more season? Would you have watched a fourth season?

Afterlife was funny dry as hell I look forward to the third season and would definitely enjoyed a fourth and fifth but, go out on top!
Cheers Ricky G.
Thanks for the laughs

I am sooooooo EXTREMELY UPSET that After Life is going to be ending. I TRULY LOVE This show. Why is it that whenever we get a show that isn’t another Medical, Police or Law based show it seems as though it gets cancelled. Don’t get me wrong I love all of the above & will always continue to watch them, but I need Variety.And After Life was Proving to be an Absolutely Amazing Show. Not only that but it Also has an Amazing Cast. So Wake Up& Keep this FANTASTIC SHOW !!!!!!!!!!!!

We absolutely love this series.

I love this series so much. I can’t wait for 3 to be released on Netflix.. personally some series go on way to long and get boring so I would do a 3rd then finsh it up. Hard for me to say because I loved watching. Brilliantly written.

After Life Season 3 is why I will keep my subscription…then, I’m cancelling Netflix. Too many old shows and movies that most of us have already seen on regular tv or movie theatres.

I joined Netflix because of Afterlife. I love Ricky Gervais & his matter of fact sense of humor. I have also loved Kominsky Method w Mike Douglas & Alan Arkin. Frankie & Grace has also been fun to watch. I have tried watching other “period” shows but can’t watch the violence. I can watch violence everyday on the news. Give me lighthearted comedy…please

I’ve grown to really love this subtle, funny, touching series. I am very happy there will be a third season.

I’d love to know the background that inspired this series.

A thoughtful program I have liked watching. I suspect, and am fine with, a happy ending. His relationship with the characters, but especially himself and his dog, strike me as being direct takes from his life.

Allegedly it is all about getting in new subscribers. Existing subscribers must just be happy they get what they got even if that show is why they joined.

I have learnt to not expect more than three seasons from any new Netflix show. Hopefully writers will start doing the same and stop including cliffhanger endings that will never get resolved.