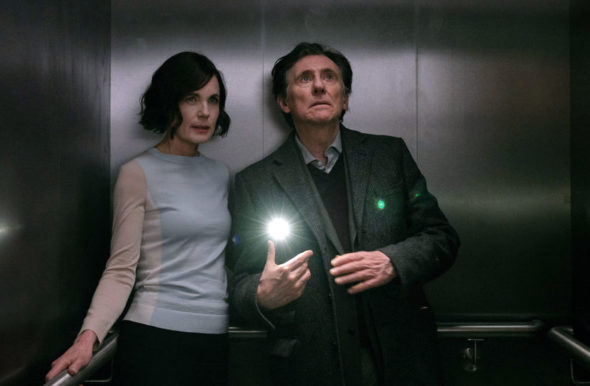 Perhaps inviting aliens to visit your planet isn’t such a great idea. Has the War of the Worlds TV show been cancelled or renewed for a second season on EPIX? The television vulture is watching all the latest cancellation and renewal news, so this page is the place to track the status of War of the Worlds, season two. Bookmark it, or subscribe for the latest updates. Remember, the television vulture is watching your shows. Are you?

Airing on the EPIX cable channel, the War of the Worlds TV show stars Gabriel Byrne, Elizabeth McGovern, Léa Drucker, Adel Bencherif, Emilie de Preissac, Natasha Little, Daisy Edgar-Jones, Ty Tennant, Bayo Gbadamosi, Stephen Campbell Moore, Stéphane Caillard, and Aaron Heffernan. The story takes place in present-day Europe and begins as astronomers detect a transmission from another galaxy. This serves as definitive proof of intelligent extraterrestrial life. Within days, mankind is all but wiped out by a devastating attack and pockets of humanity are left in an eerily deserted world. As aliens hunt and kill those who have been left alive, the survivors ask a burning question – who are these attackers and why are they hell-bent on our destruction? The survivors soon learn that the aliens’ savage attack on Earth is anything but arbitrary.

Will EPIX cancel or renew War of the Worlds for season two? The cable channel pays for the rights to air the show in the United States and that’s a lot cheaper than producing the show independently. Word is that the producing companies are already working on season two. So I suspect that, if a second season is made, EPIX will air that as well. I’ll keep my ears open and an eye out for news, and will update this page with breaking developments. Subscribe for free alerts on War of the Worlds cancellation or renewal news.

7/12/20 update: War of the Worlds has been renewed for a second season.

What do you think? Are you glad that the War of the Worlds TV show has been renewed for a second season? How would you feel if this TV series had been cancelled, instead?

Deserves a season 2… BUT!! I see annoying elements of characters doing some seriously dumb “stuff” as a mechanism to drive the story forward. That deliberately obtuse mother of that psychopathic son. She’s making it a purposeful point to be blind to her child.. It’s the end of the world and she’s suffering his pouting, scheming tantrums. That blind girl doing selfish stupidness that’s gonna cost that token “cap’n save a ho” his life.. for nothin’. They seem to have developed a kind of foolish, unswerving curious sympathy to those that essentially wiped out virtually all of humanity. I can’t… Read more »

It was disappointing that WOTW has only eight episodes, and may continue into a second (final?) season. The directors / producers could have wrapped it up with two or three more episodes. The story also seems to be taking on a Young Adult aspect, which will surely make it unbearable for grownups like me.
I found the show enthralling, sophisticated, well acted and atmospheric.

Would love to see a second season. Please renew.

They better have season 2, like wtf? Why wud u leave it at tht? Maybe there were highly intelligent humans on earth b4 the dinosaurs but had to leave the planet due to something they did but have now return to reclaim their planet? Idk I’m jus sayin if ideas on where to go with it then there’s one. But they can’t jus leave us hangin like tht…

War if the worlds tv series was fantastic i was on the edge of my seat watching waiting for season 2 . please