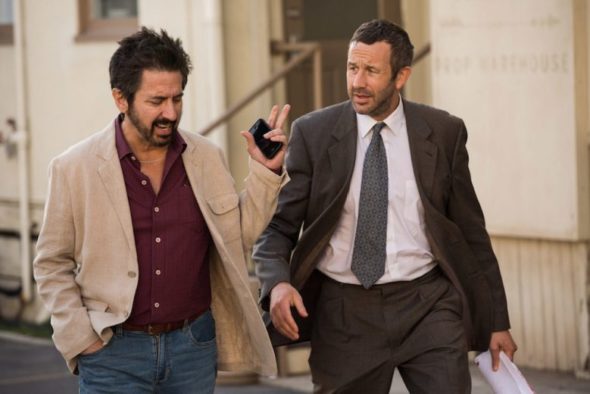 Get ready for more Get Shorty. Today, EPIX announced they’ve renewed the TV show for a third season.

Season three of Get Shorty is expected to debut on EPIX in 2019.

NEW YORK ─ December 11, 2018 ─ Premium pay television network EPIX®, an MGM company, has renewed its original seriesGet Shorty for a third season. The dark comedy from MGM Television, based in part on the 1990’s bestselling Elmore Leonard novel of the same name and created for television by Davey Holmes (Shameless, In Treatment) will return in 2019 with all-new episodes.

The series follows Miles Daly (Chris O’Dowd), muscle for a Nevada crime ring who tries to become a movie producer in Hollywood with the help of a washed-up producer, Rick Moreweather (Ray Romano), as a means to leave his criminal past behind. In season two, Miles struggles to reconcile his ambitions as a filmmaker and a family man with his skill set as a career criminal. His progress in Hollywood is jeopardized when the washed-up producer, with whom he partnered in season one, agrees to wear a Federal wire.

In season three, Miles embraces more ruthless methods as he settles scores and attempts to climb the Hollywood ladder.

“Chris O’Dowd and Ray Romano have so thoroughly embraced their roles, and I know I speak for all fans of Get Shorty when I say that we can’t wait for their escapades to unfold in season three,” said EPIX President Michael Wright. He added, “The entire EPIX team is looking forward to working again with Davey Holmes, Adam Arkin and the MGM Television team to continue Get Shorty’s success.”

Get Shorty season three is executive produced by Holmes and Adam Arkin (The Americans, Sneaky Pete). The series is produced by MGM Television and internationally distributed by MGM.

What do you think? Are you a fan of Get Shorty? Will you watch season three?

This show is a blockbuster. All of the actors are amazingly talented. They have the talent to make it real, and really addictive.

This show is a blockbuster. All of the actors are amazing and have that magic to make it real, and really addictive!

We were very surprised it didn’t get nominated for anything. Especially Ramano ..Looking forward to next season

Great news! I only signed up to this e-service to get this news (good or bad) as soon as possible! Comedy-drama of the highest order. Great script. Even the sound-track is terrific. Now I gotta hope that SKY (UK) pick up Season-3. I can’t think why they wouldn’t – but there again I don’t know the UK viewing numbers. But hey! I LOVE it! That’s gotta count for SOMETHING, surely?!