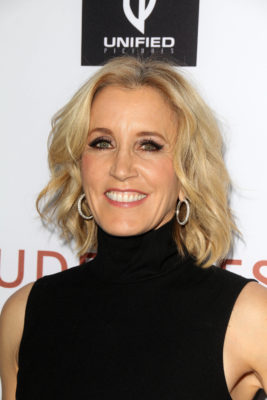 Felicity Huffman is coming to EPIX. Recently, the network announced the American Crime star has joined season two of Get Shorty.

On Get Shorty, Huffman will be playing “Clara Dillard, a mothering, high-level special agent for the FBI, described as hippie therapist meets J. Edgar Hoover.” Season two of the series has already begun production and is expected to debut on EPIX later this year.

NEW YORK – February 8, 2018 – Premium pay television network EPIX(R), an MGM company, today announced that production is underway on its critically-acclaimed original series Get Shorty, with Emmy(R) and Golden Globe(R)-winning and Academy Award(R)-nominated actress Felicity Huffman (Transamerica, Desperate Housewives) joining the cast as a recurring guest star. Huffman will play Clara Dillard, a mothering, high-level special agent for the FBI, described as hippie therapist meets J. Edgar Hoover. She takes over the investigation focusing on Amara and the crime organization in season two. The dark comedy from MGM Television, based in part on the 1990’s bestselling Elmore Leonard novel of the same name and created for television by Davey Holmes (Shameless, In Treatment), will shoot its ten-episode second season entirely in Los Angeles. The series returns to EPIX later this year.

In season two of Get Shorty, Miles Daly (Chris O’Dowd) struggles to reconcile his ambitions as a filmmaker and a family man with his skill set as a career criminal. His progress in Hollywood is jeopardized when the washed-up producer (Ray Romano), with whom he partnered in season one, agrees to wear a Federal wire. Miles faces off with criminal financiers and with a Hollywood power-broker who could be the most dangerous of all.

Best known for her award-winning role as Lynette Scavo on ABC’s hit series Desperate Housewives, the talented Huffman has appeared in a multitude of prolific roles across both film and television. She earned an Academy Award(R) nomination, as well as a Golden Globe Award and Independent Spirit Award for her performance in the acclaimed 2006 film Transamerica. Most recently, she appeared in the ABC limited series American Crime, for which she received three Emmy(R) nominations. She is also a founding member of the off-Broadway Atlantic Theater Company.

Get Shorty is executive produced by Holmes and Adam Arkin (The Americans, Sneaky Pete). The series is produced by MGM Television and internationally distributed by MGM.”