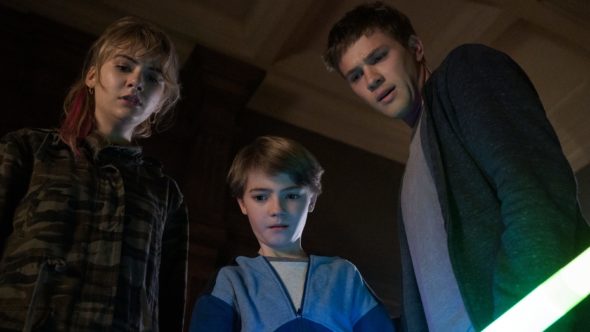 The world of Locke & Key isn’t going away soon. Netflix has renewed the supernatural-horror drama series for a third season, ahead of the second season’s 2021 premiere.

Based on the comic books by Joe Hill and Gabriel Rodríguez, Locke & Key stars Darby Stanchfield, Connor Jessup, Emilia Jones, Jackson Robert Scott, Petrice Jones, Laysla De Oliveira, and Griffin Gluck. The story follows the Locke family — mother Nina (Stanchfield); eldest son Tyler (Jessup); daughter Kinsey (Jones); and Bode (Scott), the youngest son. The family moves into their mysterious ancestral home in Massachusetts after the gruesome murder of the clan’s patriarch, Rendell (Bill Heck). The kids discover that the house has magical keys that give them a vast array of powers and abilities. Unknown to them, a devious demon also wants the keys, and will stop at nothing to attain them.

The first season of 10 episodes was released in early February of this year and Netflix renewed the series for a second season at the end of March. The streamer often renews series within 6-8 weeks of a previous season’s release.

The third season renewal announcement was made on social media earlier today.

Locke and Key fans, the cast has some news for you: The show has been picked up for Season 3!

But first, Season 2 will arrive in 2021! pic.twitter.com/d4c0dheBkZ

According to Deadline, production on season two wraps this week in Toronto. The cast and crew will begin filming season three at the start of the new year.

“Carlton and Meredith have built an incredible world in Locke and Key and we’re excited to have the Lockes return for more in the third season,” said Brian Wright VP of Overall Deals for Netflix. “I’m delighted to expand our creative partnership with Meredith Averill, a talented creator with a keen eye for best-in-class horror and supernatural storytelling.”

“I’m incredibly grateful to have found a home at Netflix where I feel constantly supported, challenged and inspired. I look forward to continuing and expanding our relationship,” said Meredith Averill.

“We have some incredible adventures in store for the Locke family in season three, and could not be more excited to continue telling our story with our great partners at Netflix,” added Carlton Cuse.

What do you think? Have you watched the first season of the Locke & Key TV series? Are you looking forward to watching seasons two and three?

Yes I’m looking forward to it