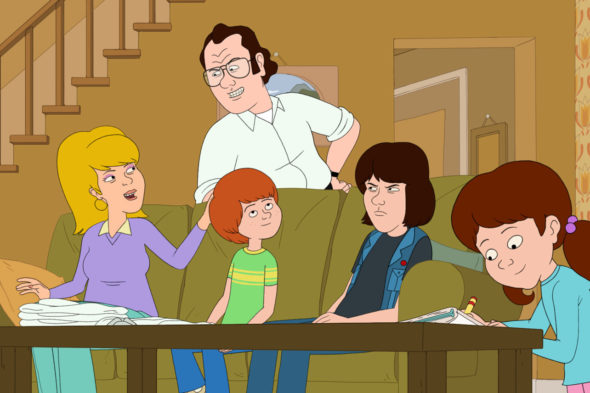 Netflix is bringing the F Is for Family TV series back for a final run in 2021. The streaming service has renewed the animated comedy TV show for a fifth season but that will also be the end.

F Is for Family comes from creators Bill Burr and Michael Price. Burr voices the male lead, Francis X. Murphy (aka Frank), as well as Father Patt. The voice cast also includes Laura Dern, Justin Long, Haley Reinhart, Debi Derryberry, Sam Rockwell, Mo Collins, Trevor Devall, and Phil Hendrie. The sitcom unfolds in 1970s Pennsylvania, where embittered Korean War veteran Frank plies his trade as a baggage handler at Mohican Airlines and, along with wife Sue (Dern) is raising his family. The three Murphy kids, Kevin (Long), Maureen (Derryberry), and Bill (Reinhart), are coming of age in the days where you could smoke cigarettes inside, and parents didn’t hover over their kids. F Is For Family is produced by Vince Vaughn’s Wild West Television and Gaumont Television.

Of the plans to end the series, Burr said, “Thank you to all the fans that watched this show. Thanks to Vince Vaughn, Peter Billingsley Victoria Vaughn, Ted Sarandos and, all the INCREDIBLE writers, performers, animators, editors, and musicians that made this show happen. Special thanks to the Captain of the Ship: The great Mike Price! I love all you guys!”

Price noted, “Working on this show with the great Bill Burr, Vince Vaughn, and our amazing cast, writers, producers, and crew has been the greatest joy of my life, and I’m thrilled that we get to do one more season with the Murphys. I’ll be forever grateful to everyone at Netflix, Gaumont, and Wild West who let us share this stressed-out, foul-mouthed, and loving family with the world.”

Executive Producer Vince Vaughn added, “It has been so great to see Mike and Bill – two guys I admire and respect – create something like this and build it from the ground-up. It has been a lot of fun getting to be a part of it, and I’m looking forward to continuing to support their vision, for the final season. A big thanks to Ted Sarandos and the whole Netflix team for being so supportive during this great journey.”

What do you think? Do you enjoy the F Is for Family TV show? Do you plan to watch the fifth and final season on Netflix in 2021?

Really enjoyed this program/cartoon. It always had laughing my ass off, too bad it won’t be back

Shame this will be the final series.