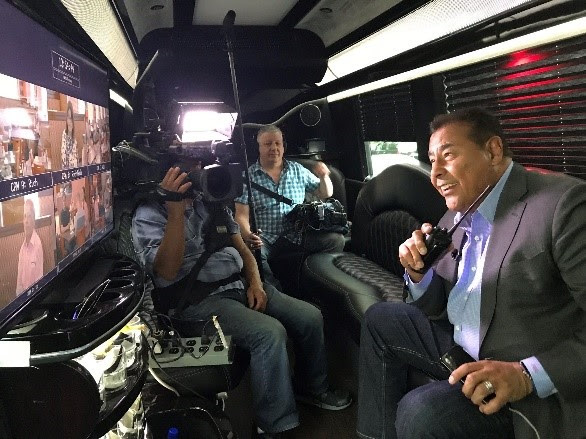 What Would You Do? is ready to wrap another season, and they are doing so with a pair of episodes. The second hour will be a special episode in a different format than the norm for this series. John Quiñones hosts this ABC series which plays out situations recorded by hidden cameras to see how unsuspecting bystanders react.

ABC revealed more about the season finale and the special episode in a press release.

“ABC presents a two-hour television event beginning with the powerful season finale of ABC’s hit show What Would You Do?, followed by a compelling new hour that confronts the moral dilemma of lying. Inspired by the classic WWYD? scenario involving a woman asking a stranger to pretend to be her boyfriend to please her nosy mother, the new hour asks the provocative question, when is it okay to lie?

Kicking off the night, What Would You Do? with anchor John Quiñones features emotional scenarios on bisexuality, gender stereotypes in sports, and more.

Then, ABC News’ Gio Benitez hosts “Would You Lie For Me?” which captures with hidden cameras jaw-dropping moments as real people are asked to lie for complete strangers. Will bystanders lie to help protect a boy from being bullied? Will people pretend to be a marriage coach for a husband whose relationship is on the rocks?

What Would You Do? scenarios airing at 9:00 p.m. EDT include the following:

A young man comes out to his friends as bisexual. His friends question his sexual orientation saying, “You can just say you’re gay. You don’t have to hide behind bisexuality.” What will bystanders do? How will people react when we twist the scenario and the friend questioning his bisexuality is gay?

At the batting cages, a girl is trying to better her baseball game. Her father disapproves, telling her, “Girls don’t play baseball.” The girl is determined to prove to her dad that she can compete with the boys. Will others come to her defense?

A newly engaged woman is out to lunch with her friend, showing off her ring. The friend is appalled at how small the diamond is. Will fellow diners step in to stop the bullying?

“Would You Lie For Me?” scenarios airing at 10:00 p.m. EDT include the following:

A young boy at an ice cream shop needs help fending off bullies. After bystanders agree to help him, the boy tells his bullies, “This is my karate instructor.” Will they go along with the fib? Will they still support the boy later when he takes a bolt cutter to a locked bike?

A focus group is reviewing a product that does not work. When they overhear the other participants lying about the product’s effectiveness, will they lie too? The salesman then asks if they will pretend to be a marriage coach for an uncomfortable meeting with his wife. Will anyone agree? If they do, will they give marriage advice?

A woman in a restaurant is waiting for her meddling mother who is in town for the weekend. To keep her mom off her back, the woman asks total strangers to pretend to be her boyfriend. Will they say yes? If they agree, how far will they take the lie when the mother asks them about their job as a cardiologist? This scenario originally aired on What Would You Do? and inspired the primetime special.”

What do you think? Are you a fan of What Would You Do? Will you watch the double episode finale later tonight? Would you check out “Would You Lie For Me?” as a standalone series?

Loved both hours, I would watch the new show.

Old news. I already saw this episode. The lie show was terrorable.