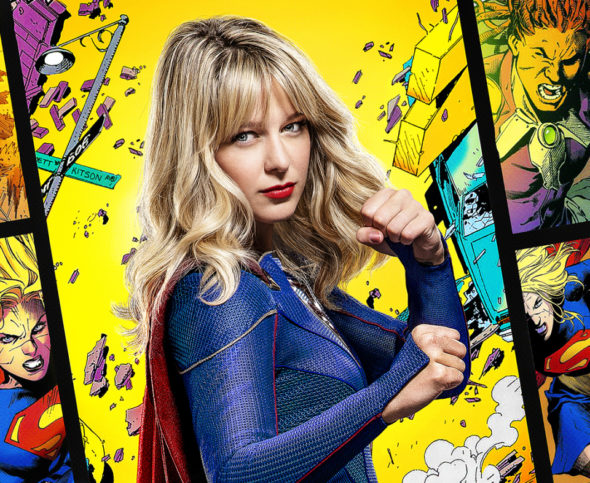 The Man of Steel is taking a break and his cousin will be taking over the timeslot. The new (and recently renewed) Superman & Lois TV show will be going on hiatus after the fifth episode airs on March 23rd, due to COVID-19 production delays. The sixth and final season of Supergirl will take over the series’  timeslot beginning Tuesday, March 30th.

Superman & Lois is expected to return to Tuesdays on May 18th for the remainder of its 15 episode season. The Supergirl series, which has a 20-episode order, will wrap up at some point during the summer.

Here are some additional details about the CW schedule change:

“SUPERGIRL” RETURNS TO THE CW SCHEDULE THIS SPRING, KICKING OFF ITS FINAL SEASON STARTING TUESDAY, MARCH 30

March 5, 2021 (Burbank, CA) – The CW’s Tuesday will become even more superpowered when SUPERMAN & LOIS gets a helping hand from their Kryptonian cousin this spring as SUPERGIRL soars onto action, returning to The CW’s schedule to kick off the first part of her sixth and final season on Tuesday, March 30 (9:00-10:00pm ET/PT).

The recently renewed freshman hit SUPERMAN & LOIS will go on a brief hiatus from The CW schedule due to a COVID-related production interruption earlier this season. SUPERMAN & LOIS will return to complete its first season on Tuesday, May 18 (9:00-10:00pm ET/PT), and SUPERGIRL will complete her final season later this summer.

SUPERGIRL is an action-adventure drama based on the DC character Kara Zor-El, (Melissa Benoist). Twelve-year-old Kara escaped the doomed planet Krypton and was sent to Earth where she was raised by a foster family. Kara grew up in the shadow of her foster sister, Alex (Chyler Leigh), and learned to conceal the phenomenal powers she shares with her famous cousin, Superman, in order to keep her identity a secret. Years later, Kara was living in National City and still concealing her powers, when a plane crash threatened Alex’s life and Kara took to the sky to save her. Now, Kara balances her work as a reporter for CatCo Worldwide Media with her work as Supergirl, keeping National City and the Earth safe from sinister threats. She’s joined in this pursuit of justice by her sister, Alex, her mentor, Martian Manhunter (David Harewood) and her friends Brainiac-5 (Jesse Rath), Dreamer (Nicole Maines), Kelly Olsen (Azie Tesfai), and Lena Luthor (Katie McGrath). As Kara struggles to navigate her relationships and her life as a reporter, her heart soars as she takes to the skies as Supergirl! Based on characters from DC created by Jerry Siegel and Joe Shuster, SUPERGIRL is from Berlanti Productions in association with Warner Bros. Television, with executive producers Greg Berlanti (“Arrow,” “The Flash,” “Riverdale”), Sarah Schechter (“Arrow,” “The Flash”), Robert Rovner (“Private Practice,” “Dallas”), Jessica Queller (“Gilmore Girls,” “Gossip Girl,” “Felicity”) and Rob Wright (“Charmed,” “Lethal Weapon”).

As a result of the schedule change, PEOPLE PRESENTS: HARRY & MEGHAN’S AMERICAN DREAM will now air Thursday, March 25 (8:00-9:00pm ET/PT). PEOPLE PRESENTS: HARRY & MEGHAN’S AMERICAN DREAM follows the lives of Prince Harry and Meghan Markle who stunned the world by existing royal life. One year later, they are very much living the American dream with multimillion-dollar streaming deals and a California mansion to call home with two-year old Archie. But a personal tragedy and ongoing tensions with brother Prince William and Kate have at times clouded their first year of freedom. This one-hour special will trace Harry and Meghan’s journey from royalty to celebrity.

The following is The CW’s updated schedule reflecting these changes. All times ET/PT:

What do you think? Are you disappointed that Superman & Lois is going on hiatus? Are you looking forward to watching the sixth and final season of Supergirl on The cW?

Well, I still think they’re making a mistake. They don’t have to make season six into the final season. Can’t season seven or eight be the final season, instead? Here’s a petition to sign up on.
https://www.change.org/p/savesupergirl
You could get all your friends and families to sign up on it, as well. If you want. Let me know if you’ve done it, OK?

Whoever gave me 3 thumbs down must’ve misread my comment.

For once I’d like to see the credit line “Supergirl created by Otto Binder and Al Plastino…” Too much to ask, WBTV?