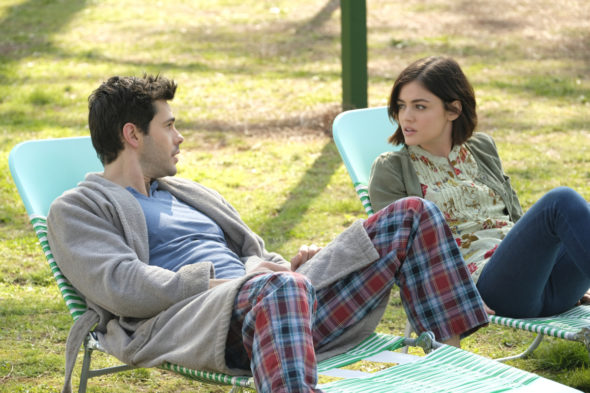 Will Stella Abbott get a second chance? Has the Life Sentence TV show been cancelled or renewed for a second season on The CW? The television vulture is watching all the latest cancellation and renewal news, so this page is the place to track the status of Life Sentence, season two. Bookmark it, or subscribe for the latest updates. Remember, the television vulture is watching your shows. Are you?

A CW comedy-drama, Life Sentence stars Lucy Hale, Dylan Walsh, Gillian Vigman, Brooke Lyons, Carlos PenaVega, Jayson Blair, and Elliot Knight. The dramedy centers on Stella Abbott (Hale). After a lethal cancer diagnosis, she spent eight years living her life like any dying young woman might. She did things like face her fears, travel the world, and even married a stranger on a whim. After she learns she’s been cured, Stella must return to living like someone with a whole life ahead of her and help her loved ones to do the same.

The first season of Life Sentence averaged a 0.13 rating in the 18-49 demographic and 441,000 viewers. Learn how Life Sentence stacks up against the other CW TV shows.

Will The CW cancel or renew Life Sentence for season two? The ratings have been quite low. Even though The CW is expanding its broadcasts to six nights a week and is seemingly less dependent on commercial revenue, I think that this show will be cancelled. I’ll keep an eye on the Nielsens and update this page with breaking news. Subscribe for free Life Sentence cancellation or renewal alerts.

What do you think? Did you hope the Life Sentence TV show would be renewed for season two? How do you feel about The CW cancelling this TV series?

I need another season. Wes and Stella need to come back together

I absolutely LOVED Life Sentence!! I binge watched it in 2 days!! We need a season 2!!!

This is a HUGE disappointment, absolutely LOVED this show! Netflix please take it over

We loved it! Watched on Netflix and loved the dynamics of the family, the storyline and the characters. Really was looking forward to what was next. Hoping Netflix decides to take over this one, as it is a show that hits home to so many families, with the hope of a future.

This is so disappointing… I just watched this on Netflix… loved it!!

Binge watched this on netflix and loved it!! I didnt know this was a show until I found it on netflix!! Please bring it back for more seasons!!! Love love loved it!!

I just finished binge watching this on Netflix and I loved it. I hope it could come back for another season.