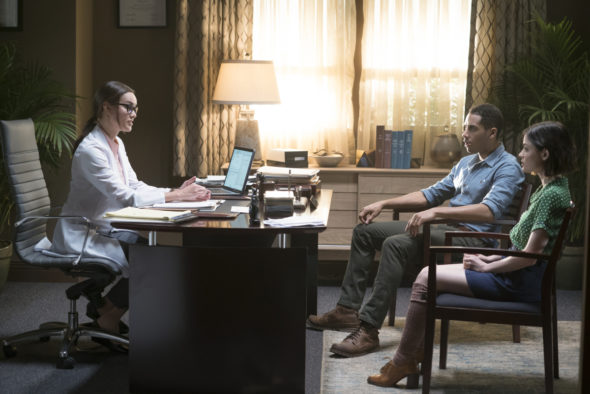 Is the first season of the Life Sentence TV show on The CW lively or deadly? As we all know, the Nielsen ratings typically play a big role in determining whether a TV show like Life Sentence is cancelled or renewed for season two. Unfortunately, most of us do not live in Nielsen households. Because many viewers feel frustration when their viewing habits and opinions aren’t considered, we’d like to offer you the chance to rate all of the Life Sentence season one episodes here.

A CW comedy-drama, Life Sentence stars Lucy Hale, Dylan Walsh, Gillian Vigman, Brooke Lyons, Carlos PenaVega, Jayson Blair, and Elliot Knight. The dramedy centers on Stella Abbott (Hale). After a lethal cancer diagnosis, she spent eight years living her life like any dying young woman might. She did things like face her fears, travel the world, and even married a stranger on a whim. After she learns she’s been cured, Stella must return to living like someone with a whole life ahead of her and help her loved ones to do the same. **Status update below.

What do you think? Which season one episodes of the Life Sentence TV series do you rate as wonderful, terrible, or somewhere between? Should The CW have cancelled or renewed Life Sentence for a second season? Don’t forget to vote, and share your thoughts, below.

please bring back the show i loved it i cried life sentence needs a season 2. this is a great happy sad television show ever. i give it a 100% 100 stars..

I just finished watching the series on Netflix hoping to see a season 2 release date. I hope y’all change your mind on canceling the show because best believe I was crying through most of the episodes… to me that’s a good thing. I just really hope season 2 comes out because I’m intrigued with Stella’s future and I find it so beautiful how Wes loves her.

Love the show please renew!!! Tired of the dark shows

Season 2 please, romance is a wonderful part of life , too much violence already exists in real life, we don’t need it on Netflix

Extremely Sad 🙁 ….Just watched the whole season on Netflix and was expecting to find when season 2 was coming out. Not to find there won’t be another season! Come on Netflix, pick this up…..Stella and Wes have to get back together!

I loved this show and really need there to be more! I don’t like how it ended! I need there to be a Wes and Stella happily ever after, together! #teamWestella. Please Please make another season and please please have Stella and Wes back together and no more Pipa or Dr. Grant!

I believe it was the best t.v. show that I ever seen. I could relate to it so well because my mom had cancer and we thought she was going to die but, she survived and is in remission hoping to keep the cancer away. It relates to so many people. So don’t be that way just because you actual have a good story here. Now a days most of the good shows are being canceled because maybe because the shows don’t get good ratings or don’t get enough ratings but in this case the show was not even out… Read more »

This show does not need to be canceled it’s a beautiful story, it hits different situations cancer and staying strong, marriage, self happiness and so much more I feel like the story isn’t over ! I watch the whole season in one day on Netflix so maybe it should be a Netflix original, I love The chemistry the cast has. #Bringbacklifesentenceforalifesentence

I love this show so ready to see more of it. Please season 2 is needed

I watched the entire season of Life Sentence and thoroughly enjoyed it. Could you explain the ending? I am a bit confused. Did they go their separate ways or walk off together?? Sorry show is cancelled.

They go their seperate ways. The last scene was her reflecting on how much she will always love Wes and how happy he has made her. It was showing how beautiful her love story is, and how it has a happy ended for both. The scene was actually the after the wedding, when her made the viral video before going to the reception.

Loved this show. The episodes just got better and better. The decision to cancel was made way too early — give a new show a chance before cancelling!! I felt the same way about the tv show Pure Genius last year. It was my favorite new show and the talk of cancelling started after the very first episode!

I’m literally crying I prefer to watch this over other popular shows like Riverdale. Don’t get me wrong I still like Riverdale and I’m not comparing the two but those are the two shows I’ve been watching recently and I was always more excited for Life Sentences episodes to come out than I was for Riverdale. Honestly they should renew it for Season 2. It’s an amazing show that makes you feels tons of different emotions whether that be intense happiness or sadness. Overall it was an amazing show which deserves a Season 2 and more

One of the best shows on TV and it is canceled???? Why

I feel the same way and I definitely agree. It became my favorite show literally after the first episode. It was kind of weird at first but I grew to love it and it became my favorite show. I think it has an amazing plot line and should be renewed for season 2 and more seasons. I don’t understand why it was canceled either. Excuse me while I go cry