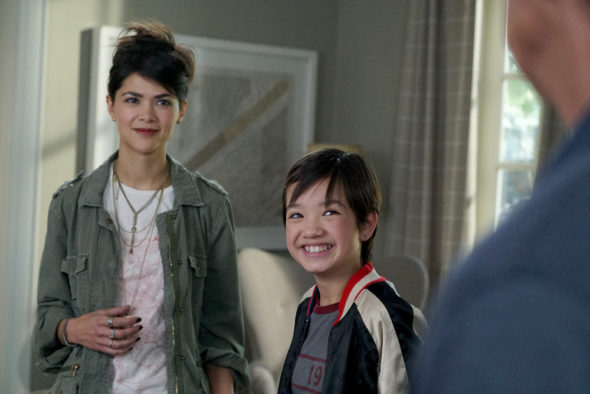 The final episodes of Andi Mack begin on Disney Channel on June 21st at 8 p.m. ET/PT.

Andi Mack,” a series hailed for inspiring social change, returns with its final episodes every Friday beginning JUNE 21 through JULY 26 (8:00-8:30 p.m. EDT/PDT) on Disney Channel and DisneyNOW. Two episodes will be presented on Friday, June 21.

Creator and executive producer Terri Minsky said, “‘Andi Mack’ was a labor of love for a room of impassioned, inventive writers, a talented and dedicated crew, and an extraordinary, miraculous cast who inspired us all. We had the honor of breaking a lot of new ground for Disney Channel. We were its first serialized show, its first series centered around an Asian American family, and its first to feature an LGBTQ character who spoke the words ‘I’m gay.’ But the best part of making ‘Andi Mack’ was our audience, who let us know we mattered to them. The series finale is for them.”

Gary Marsh, president, Disney Channel, said, “Three years ago, we challenged Terri Minsky to create a new series that expanded and broadened the Disney Channel brand. And so was born ‘Andi Mack.’ We are forever grateful to Terri, her talented team and the outstanding cast, led by Peyton Elizabeth Lee, for delivering a meaningful and satisfying conclusion to three wonderful seasons of this brilliant series.”

Year to-date, “Andi Mack” is Disney Channel’s most-watched series overall and its highest-rated among Kids 6-14. It is also the recipient of a Television Academy Honor, a GLAAD Media Award, a U.S. Asia Institute honor, the Common Sense Media Seal for Quality Family Programming and a Peabody Award nomination.

The series is produced by Horizon Productions, filmed in Salt Lake City, Utah, and carries a TV-G parental guideline.”

What do you think? Does your family watch Andi Mack? Are you sad it’s ending?

why is andi mack off of disney plus

I wish Andi Mack had a season 4. I created 2 petitions to help get the show renewed.

Here are the links to my petitions:

It’s sad that some of the less-than-impressive shows got renewed over Andi Mack. Andi Mack was a great show and it taught very good lessons. The other shows (Bunked, Coop And Camy, Raven’s Home, Sydney To The Max, Just Roll With It) do nothing like that but ruin children’s minds. I hope Disney realizes what a mistake they’ve made and reverse their cancellation decision.

Please dont cancel this show…there is not much on t.v. to watch anymore, and i get tired of reruns and i get tired of shows ending in May, and starting up new shows in Oct. I see Andi Mack show is high rated, so y are you at Disney canceling this show…. don’t anyone care about what the public thinks and cares about, because if you did not have the public views, you guys would not have jobs……please reconsider bringing Andi Mack Back!!!!!!

Can’t understand why you are ending a awesome tv show for kids with a high rating . I even watch this show . It has covered a lot of what kids n teens of all ages go through . Do you really want to end something that is truly as outstanding as this ?!

I have an 11 year old who just completed the first year of middle school and a 10 year old who is a rising 5th grader. They love this show, as do I! And I am their mom. The show is intelligent and relevant! It touches on sensitive topics in an age-appropriate manner. I don’t know if any of the execs at Disney will read this, but cancel Andi Mack, yet renew some of those shows with poorly written, humorless scripts. Disney, keep Andi Mack, it’s wonderfully appealing!