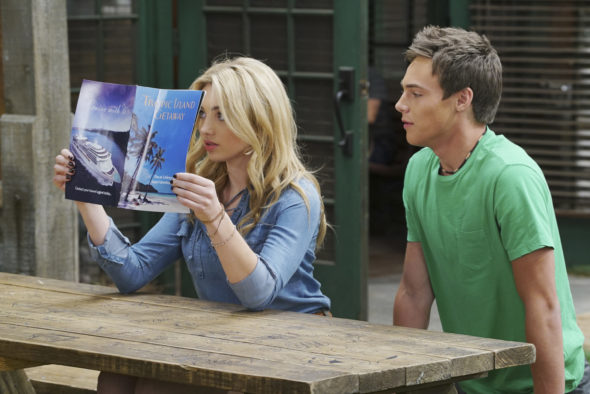 Summertime activities will soon come to an end at Camp Kikiwaka. The Bunk’d TV show has been cancelled by Disney Channel. Watch star Skai Jackson confirm the Bunk’d cancellation, below. The good news is, there is still one more season of fun and games yet to come. While there will be no season four, back in August of 2017, Bunk’d was renewed for a third season, so there are some more adventures on the way.

11/15/18 update: The series was later renewed for a fourth season but, with new campers.

I just watched season 5 and other things said there was a season six yet to come so I’m exited I hate that Emma, Zuri, rovi, Xander and others had to leave tho

this series has been amazing i really hope Disney gets this all together and u know we all miss the person who was the best ever is jessie and guest starring Cameron boyce we love u Cam.we will always remember u in our heart we were all from the same god so if u think about it he is kinda our brother.Disney really needs to get sichuwated [sorry if i did not spell that right] WE LOVE U DISNEY.but u need to stop taking the good shows away.jessie was amazing and so was bunk’d please oh please don’t take bunk’d… Read more »

NO ITS COMING BACK FOR A SEASON FIVE

it actually true it is making season 5

And a season six

i think the show must go on

its not over it got the season 5 renewal

I think it is stupid that they are ending Bunk’d i love that show i am really mad .

when is the last show being filmed

My kids and I are very unhappy with the cast changes. The reasons I’ve read are just ridiculous. It’s not the same show, those characters and the story did not need to be changed.
Good job ******** up a good thing Disney, just like star wars.

now that i think about it they had Jessie and bund’k but in season 3 of bunk’d they never tell what happen to zander or hooray or a lot of missing people, i was expecting that zander propose to Emma then it was over but no destiny ,mateo, and Finn came along and rued the season.

I feel like they robbing us entertainment because they keep introducing new stuff to us then when we really love it they take it away. and if it was up to me I’d renew this bunk’d production because it kept us busy

Yes it def kept us laughing and happy during quarantine, which is what we needed the most, and now that its gone, who will put light in this void of darkness we’re trapped in?

Yeah I want to see Lou run the camp

yah same what if they made a spin-off series

That would be cool, but also funny because its a spin off of a spin off

Your wish has come true it’s getting Renewed for a fifth season :DDDDDD
https://tvseriesfinale.com/tv-show/bunkd-disney-channel-cancelled-renewed-season-five/