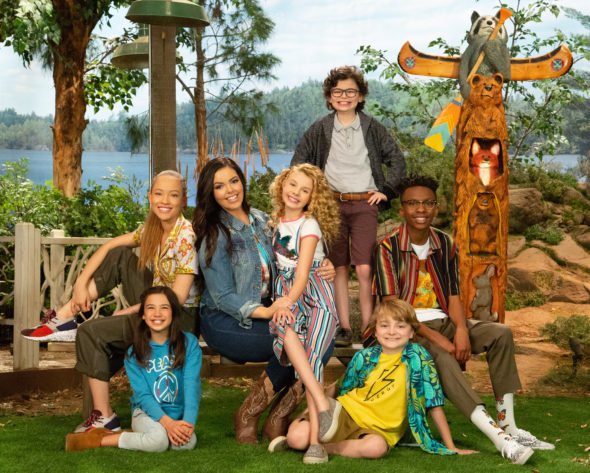 Is Camp Kikiwaka still alive and kicking? Has the Bunk’d TV show been cancelled or renewed for a fifth season on Disney Channel? The television vulture is watching all the latest cancellation and renewal news, so this page is the place to track the status of Bunk’d, season five. Bookmark it, or subscribe for the latest updates. Remember, the television vulture is watching your shows. Are you?

The fourth season of Bunked is averaging a 0.11 rating in the 18-49 demographic and 512,000 viewers. (For kids’ programming, the 18-49 demo obviously isn’t as relevant as the total viewer numbers. However, we’re including them so one could compare this show’s numbers with programs on the major networks and other cable channels.)

Will Disney Channel cancel or renew Bunk’d for season five? I suspect that it will be renewed. For now, I’ll keep a hungry eye on the ratings and update this page with breaking developments. Subscribe for free Bunk’d cancellation or renewal alerts.

What do you think? Are you glad Bunk’d has been renewed for a fifth season? How would you feel if they had cancelled this TV series, instead?

I want to be on the show

the show was better with the Ross’ and Xander. my granddaughters don’t like the new show, these new kids are not funny.

Johnny B
Reply to  Barb Flickinger

I agree I like them, but not as much as the old kids

If Bunk’d Season 5 will be over and decided to add two more episodes just because they doesn’t know if Season 5 happen? I want it to happen.

Bunk’d schould be back for Season 5..So please renew it for another season..along with the same cast..

Bunk’d should be back for season 5 with the same cast..So Please renew IT..

Because of actors aging out of their characters, and, contracts that guarantee salary increases if a show goes beyond a certain number of episodes or seasons, most Disney Channel programs run for a maximum of 3 seasons. Time will tell if Bunk’d has enough behind it for season #5.

If Disney Channel decides to cancel Bunk’d Season 5 from happening, I wouldn’t be mad about I would be sad that Season 4 might be the end for Miranda May, Mallory James Mahoney, Raphael Alejandro, Will Buie Jr, Shelby Simmons, Scarlett Estevez and Israel Johnson. The end for everyone. In the start, I wanted Season 5. Twelve anniversary for Lou as a counselor. Third summer for Destiny, Matteo and Finn. Second summer for Ava, Gwen and Noah. Season 4 was the first season without Emma, Ravi and Zuri. Season 5 might be the second season without The Rosses.

I want that Bunk’d Season 5 happen. I want to meet Gwen, Ava and Noah a little bit more. I met Emma, Ravi and Zuri since they started their role on Jessie since 2011. I’ve met them for 8 years straight. I met Lou since she was a counselor of Woodchuck Cabin. And I met Destiny, Matteo and Finn since they were chosen to come in Bunk’d Season 3 when the studio found out that Xander, Jorge and Tiffany wasn’t going to come back. But now that I lost Emma, Ravi and Zuri I miss them so much. They wasn’t… Read more »

Actually, Peyton (Emma) is coming back for season 5! It’s so exciting! Cant wait for this season!

Guess what, Scarlett Estevez (Gwen) is also coming back in Season 5. I don’t know what episode where she will make a guest appearance, but we are going to have to wait and see.