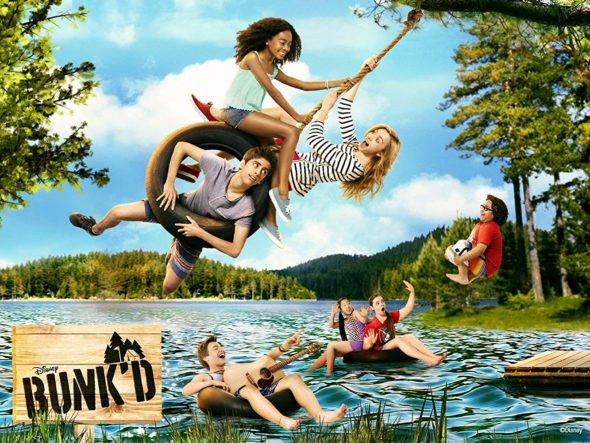 TV show description:
From creator Pamela Eells O’Connell, the Bunk’d TV show is a spinoff of Jessie, which ran on Disney Channel between 2011 and 2015. The kids comedy unfolds in Moose Rump, Maine at rustic Camp Kikiwaka.

For the first three seasons, the sitcom follows Emma (List), Ravi (Brar), and Zuri Ross (Jackson). Each summer, these siblings leave their New York City penthouse to attend Camp Kikiwaka — where their parents met. Founded by Jedediah Swearengen, the camp is named for a legendary creature said to dwell in the woods.

The series centers on friendship and the fun and challenges of camp. At the end of season two, a fire wipes out some of the cabins. In season three, after the owner takes the insurance money and runs, the Ross kids convince their parents to buy the camp and let them manage it. By season’s end, they sell it to counselor Lou (May) for $1.00, so they can pursue their dreams.

The fourth season kicks off with good-natured Lou acclimating herself to her new role as the director of Camp Kikiwaka. Campers Destiny Baker (Mahoney), Finn Sawyer (Buie), and Matteo Silva (Alejandro) return for another fun summer and are on hand as Lou welcomes new counselors Noah (Johnson) and Ava (Simmons), as well as new camper Gwen (Estevez).


What do you think? Do you like Bunk’d TV series? Should this Disney Channel TV show be cancelled or renewed for another season?

I have always been a Disney maniac and I love Bunk’d but I do feel that it has trailed off a little from its original story line.

I want season 6 to be renewed tonight or tomorrow

it should be renewed for season 6

Bunk’d schould come back for season 6…..is Alejandro still on the show or did he leave?as Mateo.

As an Indian American mom who was born and brought up in America, I grew up watching Disney shows with all white characters. My 9 year old son was so excited to see an Indian character, Ravi, ( the same name as his dad) on the show. As my husband and I began watching, we were bewildered to see the only two Asian characters portrayed in such a negative and stereotypical manner. My son was asking why “ Ravi” had an accent. Why is he the only immigrant character and why can’t he be an American kid without an accent.… Read more »

You got a good point, there’s some real basic mistakes Disney makes over and over again. And when you this series you see a lot of it the mistakes that they continuously make. The problem is not the concept of the shows; but the diversity in the scripts is what really agitates viewers. If you go through any of ABC’s diversified movies TV shows etc. you see the same mistakes they make continuously but because they’re such a large network company they can do whatever they want. Diversity is a wonderful thing, but most recent years the last 12 years… Read more »

If you knew the story, you would know that Ravi was adopted from an orphanage in India on the Jesse tv show. I would think that a kid who was born in India and lived there for several years would have an accent. Nothing is stereotypical about it, and so what if it is. Stereotypes exist because certain cultures have distinct characteristics that make them different from other countries. If a tv show in India has an American kid on it, chances are the kid would speak English and have an American accent.