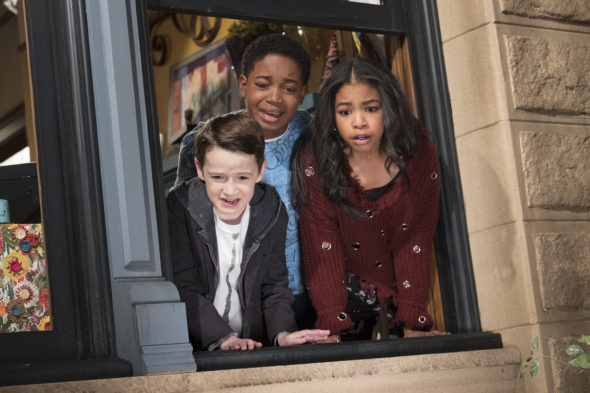 Is Disney Channel still raving about Raven Baxter? Has the Raven’s Home TV show been cancelled or renewed for a fourth season on Disney Channel? The television vulture is watching all the latest cancellation and renewal news, so this page is the place to track the status of Raven’s Home, season four. Bookmark it, or subscribe for the latest updates. Remember, the television vulture is watching your shows. Are you?

The third season of Raven’s Home on Disney Channel is averaging a 0.12 rating in the 18-49 demographic and 513,000 viewers. Compared to season two, that’s down by 31% and 38%, respectively. (For kids’ programming, the 18-49 demo obviously isn’t as relevant as the total viewer numbers. However, we’re including them so one could compare this show’s numbers with programs on the major networks and other cable channels.)

Will Disney Channel cancel or renew Raven’s Home for season four? The ratings are okay so, for now, I think the show will be renewed. I’ll keep a hungry eye on the ratings and update this page with breaking developments. Subscribe for free Raven’s Home cancellation or renewal alerts.

What do you think? Are you glad that the Raven’s Home TV show has been renewed for season four? How would you feel if this Disney Channel TV series had been cancelled, instead?

I love watching Ravens Home. I watched That’s so Raven as a child and very happy this show came out. I just finished season three so please hurry and get season 4 on Disney!

So happy the show has been renewed my grandchildren love it.

I am so sad that this corona thing exist, because now we have to wait for another season of Raven’s Home

There better be a season 4 of ravens home. It is my favorite show ever!! If it ends then idk what I will do. Pls let there be a season 4

Same, plus Raven Symone will always be my first favorite celebrity.She is super awesome.Hopefully she sees this and know how much we need a Season 5. I am a big fan of Raven that I know EVERY movie she’s been on. I have a whole collection.

I hope it surpasses more than 4 seasons, until a three kids go to college and both best friends remarry. Definitely an awesome show!

Raven’s Home better get a season 4. I want to see a reunion of Tanya, Cory, and Eddie.

I hope that Raven’s Home is coming soon this summer

Sky Katz is the person I look up to when I picture my rap career. I used to think That Girl Lay Lay was better until I heard Katz song”Like This”. Ooh that girl was on fire. Spitting all them bars at one time. I was like,”DAAAAAAAAAAAAAANNNNNNNNNNNNNNNGGGGGGGGG” at the end of the song. I didn’t even know she spit fire like that. I started listening to her ever since, but Lay Lay on the other hand I think her songs are OK. I think she’s done better. I still think she’s good, But Sky Katz destroyed Alayah with her song.

Tanya and cory would be good. But idk if Orlando is the same person who he used to be. So it might be hard for him to

I heard Orlando was found Homeless in California. I think Tanya and Cory in Raven’s Home would be surprising. I wonder if Raven could do an episode where her “brother” and “mother” come visit her and her “kids.”

I think my family are haters, because she said that she wasn’t black. So what!!!! WE ALL have opinions that nobody likes and you just gonna despise her for that. People ta-day. They are surprised I STILL favor her.