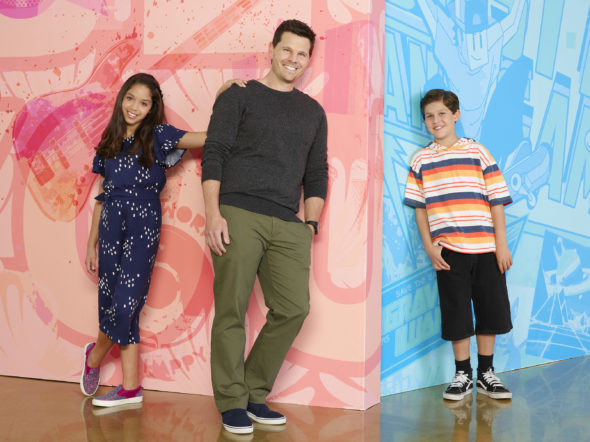 Can Sydney and Max maximize their time at the House of Mouse? Is the Sydney to the Max TV show been cancelled or renewed for a second season on Disney Channel? The television vulture is watching all the latest cancellation and renewal news, so this page is the place to track the status of Sydney to the Max, season two. Bookmark it, or subscribe for the latest updates. Remember, the television vulture is watching your shows. Are you?

A Disney Channel sitcom, Sydney to the Max stars Ruth Righi, Ian Reed Kesler, Caroline Rhea, Jackson Dollinger, Ava Kolker, and Christian J. Simon. The comedy centers on middle school student Sydney Reynolds (Righi), who lives with her single father, Max (Kesler), and his firecracker of a mother, in the house where Max grew up. No matter what Sydney is going through, Grandma Judy (Rhea) can usually relate it to a story about young Max (Dollinger).

The first season of Sydney to the Max averaged a 0.11 rating in the 18-49 demographic and 544,000 viewers. Find out how Sydney to the Max stacks up against other Disney Channel TV shows. (For kids’ programming, the 18-49 demo obviously isn’t as relevant as the total viewer numbers. However, we’re including them so one could compare this show’s numbers with programs on the major networks and other cable channels.)

Will Disney Channel cancel or renew Sydney to the Max for season two? Based on the numbers, it’s hard to tell but I think it will be renewed. I’ll keep a hungry eye on the ratings and update this page with breaking developments. Subscribe for free Sydney to the Max cancellation or renewal alerts.

5/23/19 update: Disney Channel has renewed Sydney to the Max for a second season.

What do you think? Are you glad that Disney Channel has renewed the Sydney to the Max TV show for season two? How would you feel if they had cancelled this TV series, instead?

I hope for another season I love Sydney to the Max.

I hope there is another season with fun episodes and we a can see max in the nineties as a twelve year old boy getting in trouble as Sydney from 2019 the time she’s growing up in man please have a second season with more fun episodes.

I pray too that this show is renewed!!! Me and my daughter watched every new episode together. Please disney Chanel renew Sydney to the Max!!!! Great family show for all!!!!!

Im praying it gets renewed! Its a really great show for my granddaughter and myself!