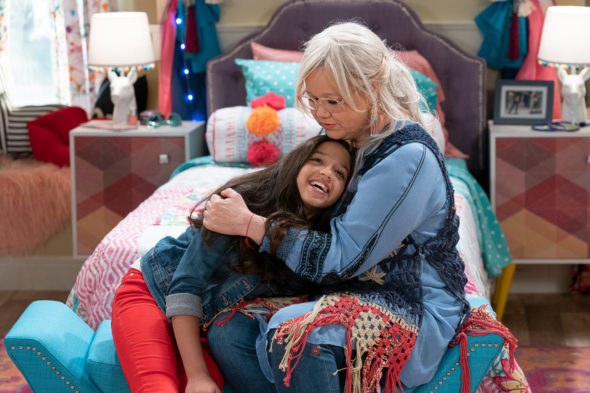 The family sitcom centers on middle school student Sydney Reynolds (Ruth Righi), who lives with her single father, Max (Ian Reed Kesler), and his firecracker of a mother in the house where Max grew up. The cast also includes Caroline Rhea, Jackson Dollinger, Ava Kolker, and Christian J. Simon.

Season two of Sydney to the Max is slated to debut on Disney Channel in 2020. You can read more about the season three renewal below:

Disney Channel has ordered a third season of its popular live-action comedy “Sydney to the Max” ahead of its season two premiere, scheduled for 2020. The endearing daughter/father comedy, set in the present day with flashbacks to the 1990s, follows middle schooler Sydney Reynolds who lives with her single dad, Max, and her unconventional grandmother, Judy. As Sydney navigates becoming a teenager alongside her bestie Olive, Max’s flashbacks of his childhood with his best friend Leo parallel her adventures, illustrating how life’s “growing pains” never change. The series stars Ruth Righi, Ian Reed Kesler, Caroline Rhea, Jackson Dollinger, Ava Kolker and Christian J. Simon. Created and executive produced by Mark Reisman (“Frasier,””Wings,” “The Exes”), the show is currently in production on season two.
“We’re thrilled to be investing in another season of this endearing comedy and to continue working with our very talented showrunner Mark Reisman,” said Kory Lunsford, vice president, Current Series, Disney Channel. “Reisman’s amazing team and this stellar cast continue to deliver stories that are both funny and meaningful for our audience. We can’t wait to see how the loveable Reynolds family and friends will continue to navigate tweendom, parenthood and friendship.”

“Sydney to the Max” is a production of It’s A Laugh Productions, Inc. It carries a TV-G parental guideline.

What do you think? Does your family watch Sydney to the Max? Are you glad it’s coming back?