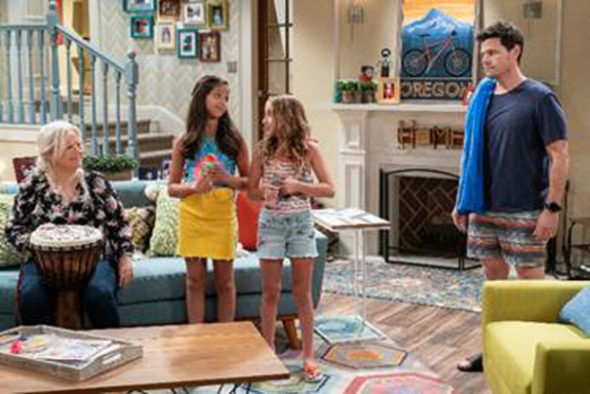 “Seventh grade can be a scary time.” Disney Channel just announced the premiere date for their new TV show, Sydney to the Max.

The father/daughter comedy “revolves around outgoing middle schooler Sydney Reynolds who lives with her single dad Max in the house he grew up in, along with her progressive grandmother Judy – three generations under one roof.” The cast includes Ruth Rughi, Ian Reed Kesler, and Caroline Rhea.

Sydney to the Max premieres on Disney Channel on January 25th at 8:30 p.m. ET/PT.

Set in the present day with flashbacks to the 1990s, the comedy revolves around outgoing middle schooler Sydney Reynolds who lives with her single dad Max in the house he grew up in, along with her progressive grandmother Judy – three generations under one roof. As Sydney’s preteen pursuits begin to expand with unexpected and funny twists, Max tries to get a better sense of the guidance, perspective and support she needs. Grandma, full of both parental wisdom and wisecracks, has a razor-sharp memory that proves Max’s own teenage antics parallel Sydney’s. Flashback scenes to a young Max and his best friend Leo juxtapose the funny predicaments invented by Sydney and her vivacious friend Olive.

In the premiere episode, “Can’t Dye This,” Sydney wants to radically change up her hairstyle for the first day of 7th grade. Her dad Max is resistant, but with Olive’s help, Sydney takes matters into her own hands.

The theme song, “Stay The Same,” was written and produced by Kay Hanley, Michelle Lewis and Dan Petty, and performed by Righi and Dan Conklin.

“Sydney to the Max” is a production of It’s A Laugh Productions, Inc. It carries a TV-G parental guideline”

What do you think? Do your kids watch Disney Channel? Will they watch Sydney to the Max?