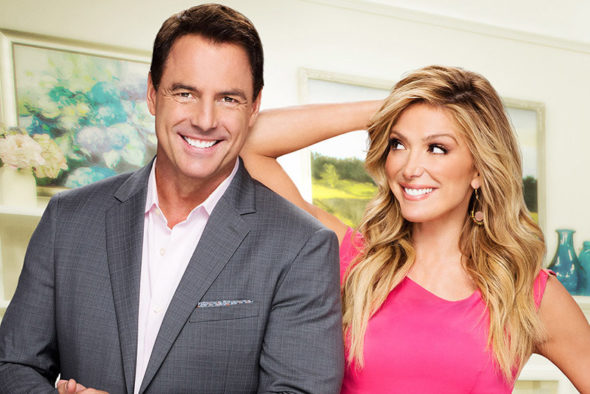 Last night, we reported that Hallmark Channel had abruptly “parted ways” with longtime Home & Family co-host Mark Steines. The cable channel’s official statement was a bit cryptic: “Today Hallmark Channel has parted ways with Mark Steines as the co-host of the network’s lifestyle series Home & Family. We are extremely grateful to Mark for his incredible work and wish him all the best success in his future endeavors.”

Given that Steines was immediately removed from the Home & Family site, more than a few people wondered if there was more to the story. Today, Hallmark made it clear that the channel had no issues with Steines. Management wants to take the series in a different direction and Steines was not part of that change.

Here’s today’s statement: “Shows evolve and change all the time. Mark has been an instrumental part of Home & Family for the past 6 years, and we are extremely grateful for his incredible work and leadership. We truly wish Mark all the best in his future endeavors.”

According to Deadline, Steines was blindsided by Hallmark’s plans and was told he was off the show only after he finished taping Thursday’s show (on Wednesday).

According to a representative of Steines, he was let go for “creative reasons”. The rep noted, “We had had nothing but positive reviews and feedback from Hallmark for the entirety of the time he has been on the show, including this year.” It is believed that Steines still had time left on his contract so it wasn’t about contract negotiations.

Steines’ co-host, Debbie Matenopoulos, fought back tears as she delivered the news to viewers at the end of today’s show. She was surrounded by seven contributors on the show’s couch.

Welcome back, everybody. So, I’m here to share some news. And the family has joined me because we truly are a family here. Now, although we had a great show, we have a hard announcement to make. We have a very hard announcement to deliver. Our dear friend, our very good friend, and my wonderful co-host for years, Mister Mark Steines, is no longer with Home & Family.

He has been an amazing friend to all of us here at Hallmark Channel, the cast, the crew and a wonderful friend to all of you at home as well. And we are grateful to Mark, and we want to thank him from the bottom of our hearts for six of the most incredible years that he has had here hosting this incredible show that, he helped build. He really did.

He’s been here from the beginning and a lot of this show has Mark’s handprint on it, so we support him in everything he does in the future, his future endeavors. We will miss him dearly and we will think about him fondly and often and we thank you all at home for your kindness and understanding and your support and for being part of our family every day.

Thank you so much, everyone. Thank you for joining us and we’ll see you back here on Monday.

This isn’t the first time that a Home & Family co-host has been suddenly dropped from the program’s “family”. Matenopoulos’ predecessor, Cristina Ferrare, was quietly removed from the program nearly two years ago. She had theoretically been on vacation for two weeks before it was announced that she was simply no longer with the program. This led many viewers to assume that Ferrare was sick (which was not the case) and led to a lot of hard feelings from viewers toward her replacement.

It’s unclear if Steines will be replaced. On Monday’s show, Matenopoulos will be joined by guest host James Denton, one of the stars of Hallmark’s Good Witch series.

What do you think? Are you sorry that Steines has been fired by Hallmark? Will you continue to watch the Home & Family TV show? If they wanted to make a change, could Hallmark have handled this in a better way?

Can’t stand Debbie M. She can’t keep her hands off Cameron, what does his wife think about that? She is stuck on herself. Like Cameron and the rest of the crew.

Debbie Metenouplous needs replacing, she doesn’t have the attraction, interest, or substance like Cristina or other ladies talk show hosts.
I do not tune in like I used to.
Several of our friends do not either.

What happen to Home and Family.? Is it off for good, or are they on vacation? Will someone please let us know. Will there be an announcement or what? We the public have the right to
know!

I think there is more to it. Who will be next? What happen to Sophie? Nothing was ever said about her leaving. Who is responsible for all this?

I am so sad to not having Home and Family to watch each morning. I loved the variety of information and stories, and cooking segments they had. why would you take such a wonderful program off the air and not inform all of the many viewers. please inform us of what is going on.

New shows are airing on Friday’s during the month of August 2019. They will be back in September daily for the new season. Yay!

What has happened to I LOVE LUCY